Rolls-Royce is accelerating testing of its Pearl 10X business aviation engine for the Dassault Falcon 10X as it closes in on certification for the Gulfstream G700-powering Pearl 700.

An initial Pearl 10X was first run in January, Rolls-Royce announced earlier this week at EBACE, and the programme has since accumulated around 1,000h, including time amassed on the Advance2 demonstrator. 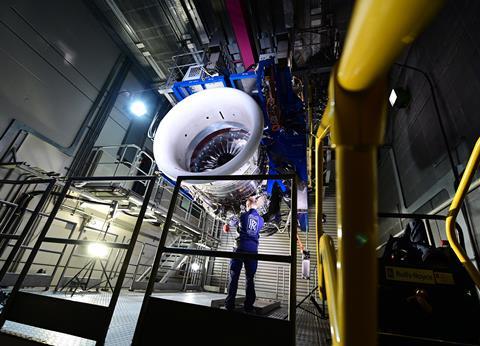 Pearl 10X engine will be most powerful in family

The first full powerplant housed within its Spirit AeroSystems-designed nacelle will enter the test programme later this year.

Performance has been in line with expectations, says Philipp Zeller, senior vice-president for the Pearl 10X.

Four engines will be used for the ground-test campaign, with another four to be trialled aboard the manufacturer’s Boeing 747 flying testbed.

Additionally, Rolls-Royce is already in the early stages of producing the engines that will power the Falcon 10X on its first flight.

“We are starting already to build vehicles for the flight-test programme of Dassault,” says Zeller.

“It is a very mature engine from the start because we are building on the experience of the Pearl 700.”

Neither Rolls-Royce nor Dassault have revealed the exact power rating of the Pearl 10X, simply saying it will produce in excess of 18,000lb (80kN)-thrust. However, Dr Dirk Geisinger, director of business aviation at Rolls-Royce, says it will be “the most powerful” of the Pearl-series engines, putting it above the 18,250lb-thrust-rated Pearl 700.

Depending on where the Pearl 10X eventually ends up, it could even claim the distinction of being the most powerful business aviation engine; that title is currently held by the GE Aviation Passport on the Bombardier Global 7500, which is rated at 18,920lb-thrust.

Despite its higher power, the Pearl 10X is contained in a nacelle no larger than that of the Pearl 700 or in-service Pearl 15.

“We get more performance out of the core – it is run hotter to achieve higher thrust. There is a big focus to package it as small as possible to minimise the drag factor,” says Zeller.

Geisinger says the results of the testing so far are positive and Dassault appears pleased with the performance. Despite this confidence he cautions that “in these programmes both sides have to stay paranoid until certification”.

Meanwhile, the propulsion specialist is closing on mid-year certification for the Pearl 700. Testing is now complete and the vast majority of paperwork has been submitted to lead regulator the European Union Aviation Safety Agency.

To date, more than 2,500 test hours and more than 8,000 cycles have been completed on the Pearl 700. While Rolls-Royce has finished its certification programme on the engine, Gulfstream continues to rack up flight hours using its six-strong test fleet.

“We have almost stopped counting these now because they are going up so quickly,” says Geisinger.

Although there is increasing focus on sustainability in the aerospace industry and the potential for alternative power sources to help the decarbonisation agenda, Geisinger cautions that the top end of business aviation will face similar limitations to long-haul commercial operations.

He points out that to take an aircraft like the G650 and maintain its 7,000nm (13,000km) range with eight passengers aboard, while converting it to run on batteries would mean the “take-off weight would be 1,000t not 45t”.

Geisinger argues that sustainable aviation fuel (SAF) and more efficient gas turbine engines will be the key technologies to help the sector reduce its carbon emissions over the next 40-50 years. Both the Pearl 700 and 10X will be capable of running on 100% SAF.

“But that doesn’t mean that we are not innovating and bringing what we are working on today as a step forward,” he says.

He sees the potential for mild hybridisation of engines in future with the gas turbine augmented by a battery that could, for example, provide additional power during high-demand flight phases.

“We would like to offer our customers thrust and a power plug,” he quips.