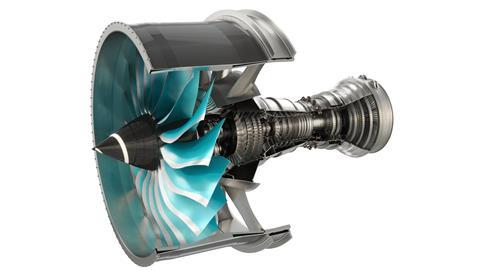 But amid such conditions, the ability of engine makers to pursue ambitious clean-energy technologies with the same gusto they showed pre-pandemic seems unlikely.

Some projects, though certainly not all, seem to have been pushed backstage.

That’s no surprise considering the numbers staring executives in the face.

Safran, which jointly owns CFM with GE Aviation, on 30 October disclosed that its aerospace propulsion revenue slipped 48% year on year in the third quarter. For the first nine months of 2020, that revenue is down 37%.

The figures partly reflect the slow pace of CFM’s Leap deliveries – a consequence of the 737 Max grounding and the pandemic-driven airline industry collapse.

Responding to that, Safran this year has cut its workforce, which stood at 95,000 staff in 2019, by some 15,000 full-time workers. The company has slashed research and development spending by one-third in the January to September period, it says.

The Ohio-based engine maker still turned a $681 million profit in the first nine months of 2020. But that figure is down 86% year on year, and GE in the third-quarter alone cut some 3,500 staff.

Executives have made clear that engine deliveries are down precisely because, amid the pandemic, airlines have little need for new aircraft. And aftermarket sales have slumped to troubling levels because airlines have grounded so many aircraft amid the downturn.

In recent decades, engine makers adopted business models based on selling new engines at discounts – even losses – then making up the difference with profitable engine-service contracts.

“This downturn is different,” Kevin Michaels, managing director at consultancy AeroDynamic Advisory, said on 28 October during the virtual MRO TransAtlantic conference. “It’s the fact that we have a major MRO and production downturn at the same time. If you add the Max shutdown into this, it really, really muddies the picture.”

Airlines have further reduced their need for engine maintenance by swapping engines from grounded jets onto in-service jets, adds Michaels.

R-R has announced only first half results. But the pandemic, in choking demand for long-haul international air travel, has slammed the UK company. R-R specialises in manufacturing engines for large widebody jets.

“The net effect is a significant reduction in the demand for new engines,” R-R civil aerospace director of product development and technology Simon Burr tells FlightGlobal.

“So much money has been sucked out of the transportation sector. It will take several years to recover,” perhaps until 2024, Burr says.

He adds that furloughing staff and other temporary cost-cutting measures “are not sufficient”.

R-R responded earlier this year by announcing plans to reduce its payroll by 9,000 workers, including 8,000 staff from its civil aerospace businesses – and to consolidate its manufacturing footprint.

The company is ending widebody-aircraft engine assembly at sites in Germany and Singapore, consolidating that work at the company’s Derby, UK site. It is also shiftingTrent fan blade production from two sites to a single facility in Singapore, concentrating disk and turbine blade machining in the UK and consolidating blisk production at two sites, down from three.

“What we are doing is consolidating where we have duplication of capability,” says Burr.

Such sweeping staff cuts could leave engine makers and other aerospace companies at risk of facing a shortage of skilled workers when a recovery does eventually take hold. Workers shown the door in 2020 could take jobs in other sectors, such as auto racing and automotive manufacturing, which need related skills, Burr says.

“There is a risk that people will be lost to the industry. There’s no question,” Burr says.

Financial stress and loss of staff raises questions about the engine sector’s ability to progress with development of clean-energy technologies. Such technologies are critical if the airline industry has a chance of meeting industrywide carbon-reduction goals.

Citing the downturn, R-R’s Burr says new-technology development “may not be at the top of the agenda… right now”.

But he insists that the “underlying environmental pressures” remain.

“They will return to center stage”, Burr says.

Earlier this year, Raytheon Technologies revealed it had slowed the pace of Project 804, an effort to develop a hybrid-electric propulsion system for a regional airliner, starting with a De Havilland Canada Dash 8-100.

Another sign: In April, Airbus announced it was ending a joint R-R hybrid-electric project called E-Fan X. Through that effort, the companies were working to equip a BAE Systems Avro RJ100 with a 2MW electric motor. The motor was to replace one of the jet’s four Honeywell turbofans, but the companies shuttered the project ahead of test flights.

Aerospace experts have long insisted that battery technology must advance significantly before being practical to power commercial airliners.

Executives from aircraft and engine manufacturers echoed that message on 4 November during the Royal Aeronautical Society’s Climate Change Conference.

They described the benefits of electric systems as incremental, not revolutionary – at least not yet.

“Today’s batteries clearly have a long way to go,” P&W senior vice-president of engineering Geoff Hunt said during the conference.

However, Hunt notes battery technology advances rapidly, meaning that “over the coming years we are likely to see substantial improvements in that area that could open up the space”.

Adding a 1MW electric system to a single-aisle jet, for instance, would allow that jet to have smaller-core turbofans, he says.

“We continue to study… how we can use that to improve efficiency, and help us down the path,” says Hunt.

That said, the industry remains under pressure to curb carbon output far more than by a few percentage points. Specifically, ICAO has set the goal for the industry to cut emissions to half of 2005 levels by 2050.

Getting there is the tough part.

But in June France pushed the industry in that direction when it unveiled a €15 billion aerospace investment plan. The plan funds clean-energy technologies and sets impressive carbon goals.

It calls for the industry to develop an A320 replacement that would be 30% more efficient and that might be powered by zero-emission hydrogen technology. The French scheme also urges development of a new hybrid-electric or hydrogen-powered regional aircraft. The plan aims for service entry of the new regional aircraft in 2030 and of the new narrowbody between 2033 and 2035.

Seemingly taking the cue, Airbus in September unveiled three hydrogen-powered concept aircraft it says could be flying commercially in the 2033-2035 timeframe. The concepts, which Airbus calls “ZEROe”, include a conventional-looking airliner, a blended-wing design and a 100-seat regional aircraft.

Future projects aside, engine makers are quick to note that current in-service and in-development engines are significantly more efficient than those of the last generation. And, they point out, today’s designs will be powering jets for decades to come.

R-R is working to improve conventional turbofan efficiency through development of its UltraFan, a next-generation widebody engine. That turbofan will achieve improved efficiency through a geared-fan architecture and greater bypass and pressure ratios, Burr says.

R-R had aimed for UltraFan to be powering aircraft beyond 2025. But little is certain amid the pandemic; R-R recently said the project could be delayed.

The UK company is also working to promote greater use of sustainable aviation fuels, and studying electric and hybrid-electric technologies, Burr says.

GE says hybrid-electric technologies are also in its sights. So too are open-rotor engines and “boundary-layer ingestion” designs, according to a GE report about technology and sustainability.

Boundary-layer ingestion designs involve mounting engines at the extreme rear of aircraft. There, engines can reduce drag by ingesting slower-moving “boundary” air, which forms along the outside of aircraft and creates drag, according to GE.

Efficiencies have come from higher bypass and overall pressure ratios, use of carbon fibre and ceramic-composite materials, hotter engine temperatures and reduced weight.