Certification of the final change required to address the outstanding durability issue on the Rolls-Royce Trent 1000 engine will not be achieved before mid-2023, a senior executive at the propulsion specialist has disclosed.

Relating to the premature degradation of high-pressure turbine blades on the Trent 1000 TEN variant, the modification will be the last of nine changes – three on each of three variants – developed by R-R for the Boeing 787 powerplant. 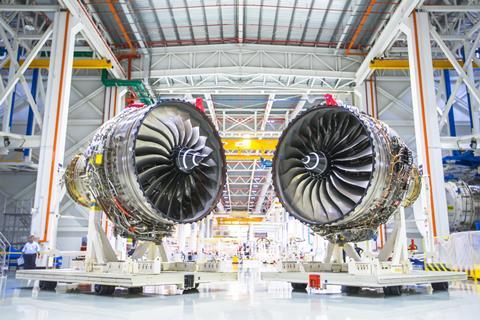 Speaking to journalists on 6 July during a briefing ahead of the Farnborough air show, Chris Cholerton, president of civil aerospace at R-R, said the “complexities of regulatory clearance” mean that certification “frustratingly is delayed until probably the middle of next year”.

That will be at least 24 months later than previously planned, itself a target that had already been pushed back from 2020.

But the same change, to the same part, has recently been approved at aircraft level for the Trent 7000 engine which powers the Airbus A330neo, he points out.

“But the reassurance I can give is that there’s no more mystery or magic needed on that – the modification’s already certified on the Trent 7000 so it’s just a case of continuing through the whole regulatory validation clearance process which we’ll get through hopefully sooner or later.”

Additionally, testing has shown that the alteration – which incorporates improvements to the internal cooling channels and strengthens the blade root – “is actually performing better than the forecast we had when we designed it”, says Cholerton.

An eighth modification, for compressor blades on the Package B model “will be fully certified by the end of this year”, he adds.

These fixes will be vital if R-R is to convince its airline customers that the durability issues with the Trent 1000 are “behind us” and to enable the manufacturer to claw back market share against rival GE Aviation on the 787.

Currently the UK engine manufacturer claims a 35% share on the Boeing widebody, against 65% for the GEnx-1B, but is hopeful it can increase that figure.

Although he admits that R-R “took a huge reputational hit with the disruption that the engine brought to our customers”, Cholerton remains confident on the Trent 1000’s long-term prospects.

Hepoints out that “when you strip out the issue that [the Trent 1000 experienced] the underlying reliability is no different to any other Trent”.

“With the issues behind it, it’s a very good engine, but you have to overcome the reputation damage,” he says.

As the market for widebody aircraft emerges from its Covid-induced hibernation, the first goal will be to win additional orders from existing Trent 1000 customers, says Cholerton, followed by the acquisition of new operators.

R-R has no specific target for its market-share goal, save for the fact that “we don’t want to be down to a third”, he says. 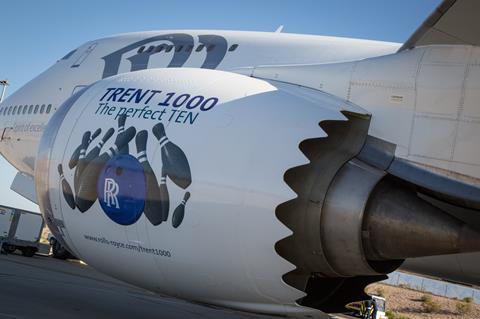 No further “dramatic” performance improvements can be incorporated into the Trent 1000 in the short term, he says. Although technologies from the company’s UltraFan technology demonstrator – which is due to run in the second half – could potentially flow back into the Trent 1000, that would be a “big investment”.

Indeed, Cholerton says the biggest enhancement it can offer on a mature engine is reliability. “What matters hugely to airlines is just the predictability of its operation – that has enormous value – and I think we are there now having fixed the issues that we unfortunately had on the Trent 1000.”

Meanwhile, Cholerton declines to reveal detail of the engine it has proposed to Embraer for the Brazilian airframer’s potential new regional turboprop airliner.

Noting that it is in the middle of a “competitive process”, he refuses to be drawn on its proposal beyond the fact that it has put forward a “compelling proposition for Embraer.”

“We are interested because it is a market that has not been disrupted for a long time,” he says.

Embraer hopes to be in a position to launch the programme in 2023.