A cracked component in the General Electric GE90 engine was behind a wing fire sustained aboard a Singapore Airlines Boeing 777-300ER on 27 June 2016.

In its final report into the accident, in which none of the aircraft’s 241 passengers were injured, Singapore’s Transport Safety Investigation Bureau has listed a series of safety actions and provided several safety recommendations.

Two hours into a flights from Singapore to Milan, the crew observed a low oil indication for the right engine of the aircraft (registered 9V-SWB), which was shortly followed by vibrations in the control column and the cockpit floor. The crew decided to return to Singapore, descended to 17,000ft and reduced the right-side engine to idle.

Upon landing, the right wing burst into flames. At the request of fire services, which took several minutes to fully extinguish the blaze, the crew did not order an evacuation using the emergency slides. Eventually the fire was put out, and all aboard exited via air stairs.

Upon examination of the engine, which was severely damaged by the fire, it was determined that main fuel oil heat exchanger (MFOHE) had caused the accident. The MFOHE contains a series of tubes, with carry either oil or fuel. Examination showed that an internal leak had occurred between the two paths, owing to a “cracked and displaced” fuel flow tube. 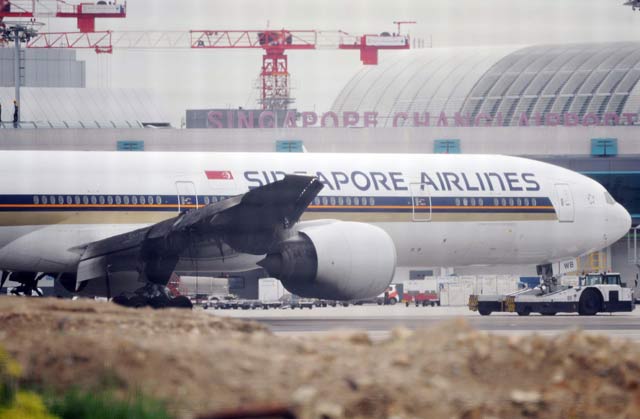 This MFOHE issue had previously been observed in the GE90-115B, and manufacturing changes implemented. In addition, a service bulletin called for heat exchangers produced under the previous process to be removed for inspection during the next engine shop visit.

As of June 2016, however, actions called for in the service bulletin had not been undertaken on 9V-SWB's engines.

“The cracking of a tube in the MFOHE allowed fuel in the fuel flow path of the MFOHE to flow into the oil flow path in the MFOHE,” says the report. “The investigation has not revealed other sources of fuel leak.”

During the flight, the crew had noticed a discrepancy in fuel levels, but did not perform the fuel leak checklist, because this can only be performed when both engines are at the same power setting.

The leaking fuel quickly filled a sump, which is intended to collect engine oil, and subsequently leaked into the booster spool cavity, from which it travelled to the high pressure compressor and the fan duct. This is possible when the engine’s variable bleed valves are open during idle power.

“The gearboxes and the engine bearings, which are usually coated in oil, were found to be dry. These observations suggest that engine oil was displaced from the engine and fuel, in place of oil, was distributed throughout the engine oil system.”

High velocity airflow prevented a fire occurring while the 777 was airborne, but upon landing the fire ignited upon deployment of the thrust reversers.

After the plane came to a stop on the runway, investigators found that the flight crew, who it acknowledges were dealing with a stressful crisis, relied solely on the perspective of a fire commander outside they jet for the status of the fire. The report adds that they received no “fire” indications from cockpit instruments.

Investigators suggest that they could have observed the fire directly through a camera located on the leading edge of the right-side horizontal stabiliser.

“According to the flight crew, they would usually switch on this camera system when they are taxiing the aircraft, as required by the operating procedures,” says the report. “However, in this occurrence, they did not switch on the system because they had not reached the taxiing phase as they had been instructed by ATC to stop at the intersection between the runway and rapid exit taxiway E7.”

Neither did the crew think to open the cockpit escape window, which would have afforded a view of the right wing, or check with the cabin crew.

On the decision not to command an emergency exit, the report says that such a decision is not straightforward. While it does generally make sense to command an evacuation when there is persistent smoke and fire, an evacuation could also expose escaping passengers to a rapidly spreading fire.

Following the event, GE took several actions, such as accelerating the incorporation of the relevant service bulletin and introducing an enhanced engine monitoring algorithm.

One recommendation following the incident includes having SIA update training “to develop its pilots’ ability to always consider alternatives and other resources when they encounter a situation that is not dealt with by any checklist.”

Others include maintenance procedures for GE90-115B engines on the ground, and a suggestion that a periodic internal inspection of MFOHE units be conducted.