Airbus has started preparing a BAE Systems Avro RJ100 for installation of an experimental hybrid-electric propulsion system later this year, as part of the joint E-Fan X technology project with Rolls-Royce.

The regional jet (G-WEFX) was in service with Swiss until 2017, Cirium fleets data shows. Airbus has stripped out the cabin interior and put in a flight-test engineer station, says the airframer’s E-Fan X programme director Olivier Maillard. 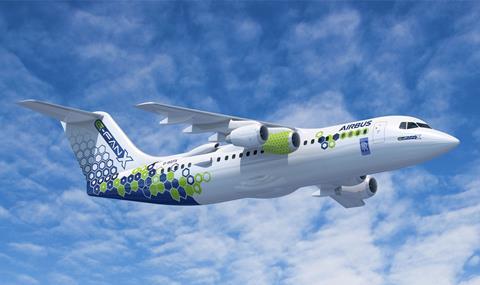 Several test flights were completed in December 2019 to confirm the emptied aircraft’s nominal aerodynamic and engine performance. But now the four-engined aircraft is staying on the ground at Cranfield in the UK for installation of the hybrid-electric equipment, which Maillard says will take place toward year-end.

The Avro’s No 3 engine will be replaced with a 2MW electric fan, powered by a 2.5MW generator – in turn driven by a Rolls-Royce AE2100 turboshaft, which normally equips Lockheed Martin C-130 military transports – and 2t of lithium-ion batteries. All of the equipment will be placed in the aircraft’s cabin. The gas turbine is to be located at the aft end.

Programme illustrations indicate that an air intake and exhaust outlet for the power-generation system will be installed in the aft fuselage crown. A separate air intake will be fitted on the forward fuselage’s port side for equipment cooling. Flight testing of the converted aircraft is scheduled for 2021.

Ground testing and systems installation will run in parallel, as the ground tests “generate evidences” required for the Avro’s conversion and clearance for flight tests, says Maillard.

Rolls-Royce’s E-Fan X programme director Riona Armesmith notes that the aircraft is a demonstrator for potential future technology rather than a distinct product development, and says the two manufacturers still have “many lessons to learn… Every day we are learning something new.”

The objective is to understand the limitations and benefits of hybrid-electric propulsion in an airborne environment – rather than ground tests – and to build a business case for the technology’s potential deployment on future aircraft, she explains.

In August, Rolls-Royce started tests of the 2.5MW generator in Norwegian city Trondheim, at a bespoke facility newly built for testing of high-voltage, multi-megawatt electrical equipment. Rolls-Royce notes that the project has benefited from the company’s marine-sector experience, specifically its work on permanent-magnet motors for electric propulsion systems on cruise ships.

The trials have included endurance tests to assess the generator’s long-term performance. “We are putting time on the equipment to really understand its operation,” Armesmith says.

The generator will deliver alternating current at “very high” frequency. This will then be converted to 3kV direct current in order to include batteries in the powertrain and to enable the use of more lightweight cables than would be required for AC. Prior to reaching the electric fan, the current will be converted back to AC.

Central to the safe and efficient operation of the electric equipment is a cooling system. Armesmith notes that “every time you touch [power], it generates loss” – in other words, heat.

In US city Indianapolis, Rolls-Royce has developed an “advanced” cooling system for the power-generation equipment. The UK engine maker is responsible for the gas turbine generator, related electronics, and the electric fan. Airbus, meanwhile, is developing a separate cooling system for the equipment under its responsibility: batteries, electrical distribution and control electronics.

In Indianapolis, Rolls-Royce has tested the cooling system on a full-scale, flight-representative thermal test rig. Armesmith describes the cooling of the electronics as “a pinch point” because the components are “quite sensitive” and their maximum allowable temperature is “quite low”. She highlights a key learning from the tests: the equipment can be sufficiently cooled to allow the manufacturer to “pool” the electronics in a “small area”.

Later this year, Rolls-Royce plans to test the entire power-generation system – turboshaft, generator, AC/DC conversion equipment, thermal management and control systems – in an integrated fashion at its facility in Bristol. The control system was previously tested, on its own, at the engine maker’s headquarters in Derby.

The electric fan equipment will meanwhile be tested on a separate test rig which is next to the power generation system and connected to it by cables.

Airbus has, in Czech capital Prague, conducted short-circuit tests of the cabling network. Maillard says the high-voltage trials are continuing “very intensively”. He acknowledges that an increased likelihood of arcing round high-voltage conductors at altitude is a key challenge for the E-Fan X project.

Known as the corona effect, electrical discharge through air can naturally occur around high-voltage conductors on the ground. But the effect increases with reduced air density and poses a risk of short-circuits. Airbus and Rolls-Royce have previously that they are looking at new ways of insulating cables, reducing electric-magnetic fields around conductors, and managing electric loads.

Maillard confirms that the objective of the flight tests is to explore the Avro’s entire flight envelope, which has an operating ceiling at 35,000ft. “If we feel that we can reach this altitude safely and we are convinced we can do it, we will be keen to fly to this altitude,” he says. But he indicates that the flight tests will be conducted in a highly controlled fashion. He adds: “The exact altitude and exact flight operation is something we firm up in the course of our progress.”

Airbus has also commissioned a battery-testing laboratory. Maillard says that tests have concentrated on different safety cases for the batteries and increasing the number of battery cells to achieve the required performance. He says the manufacturer is “getting closer to” a solution for the batteries. In Bristol, the airframer is in the process of conducting windtunnel tests in Bristol with a 1:8 scale model of the modified Avro.

The electric fan will produce slightly lower maximum thrust than the LF 507 engine it replaces. But Armesmith says: “At altitude you won’t see any difference.” Maillard expects the electric fan’s performance to be in the “in the same range” as the conventional turbofan’s. The electric propulsion system’s output will be “noticeable for the pilots and crew”, he says.

When the E-Fan X project was launched in 2017, Airbus and Rolls-Royce said they might replace a second gas turbine with an electric fan “once system maturity has been proven”. Maillard confirms that the proposal is still an option, but says the two manufacturers are not working on it “right now”.

The project’s “absolute priority”, he says, is to successfully operate the system and become “the first in the world to fly such a powerful hybrid system” on a transport-category aircraft. While the two manufacturers have “no clear picture right now” of what a hybrid-electric commercial aircraft might look like, Maillard says the technology must be available for a potential future application from around 2030 “at the latest”

This analysis was written by Michael Gubisch, a London based member of Cirium’s reporting team