NASA has launched a research effort aimed at squeezing 5-10% more fuel efficiency out of turbofan cores, with the goal of developing engine technology for future commercial aircraft, possibly including an eventual Boeing 737 replacement.

The agency launched the $191 million effort, called Hybrid Thermally Efficient Core (HyTEC), about one year ago with the goal of developing a “high-power-density” turbofan core.

Such a core could benefit single-aisle aircraft entering service in the “early 2030s”, according to NASA documents.

HyTEC’s other goals include increasing an engine’s bypass ratio to 15% (up from around 12% today) and its pressure ratio to about 50%. In addition, it seeks to demonstrate that 10-20% of a turbofan’s power can be extracted as electricity.

That last goal can enable “more-electric” aircraft, meaning those in which traditional aircraft systems – those typically using pneumatic or hydraulic actuation – are replaced with lighter, simpler electric systems that are also easier to maintain.

“We do think we can make a pretty big jump in fuel burn… by making the core smaller,” says HyTEC project manager Tony Nerone.

“This is all targeted toward… the future aircraft,” he adds. “Eventually, a replacement for the 737, in 10-plus years.” 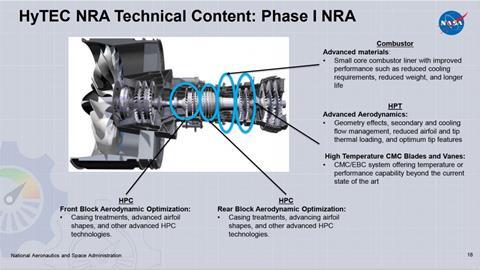 This slide, released by NASA in February 2020, summarises aspects of turbofan technology being studied by NASA’s HyTEC project

Nerone clarifies that NASA is not working with Boeing on the project. Partners will primarily include engine companies, and technology developed could benefit all aircraft makers, not just the US airframer.

NASA has, however, lined up GE Aviation and Honeywell as partners, and in February issued a draft request seeking more industry collaborators. The agency hopes to split HyTEC’s cost with partners.

Boeing has not disclosed any firm plans to develop a new commercial aircraft but has said it is examining whether to launch a mid-size commercial aircraft. However, the timing remains uncertain owing to factors including the pandemic, though some analysts suspect the Chicago-headquartered airframer might aim to bring a new aircraft to market in the early 2030s. Airbus will also, at some point, need to develop a replacement for its A320neo-family aircraft.

The HyTEC team aims to build and demonstrate advanced turbofan cores by the end of 2026. “The engine companies would take it from there,” Nerone says.

He thinks HyTEC’s findings, combined with other engine improvements, could enable the next turbofan to be up to 20% more efficient than current models.

The project remains in a “formulation stage”, meaning aspects could still be tweaked. But Nerone expects HyTEC will become an official NASA project this summer following a high-level review.

Shrinking a turbofan’s core increases its bypass ratio, which improves efficiency. But engine makers have already reduced core size as much as possible with available technology. They will need new materials and designs to make further improvements.

Shrinking a core is not as easy as just reducing the size of components. That is because smaller cores are hotter, meaning engineers must use advanced materials that are more heat resistant and less subject to expansion. They are studying ceramic matrix composites and advanced coatings, developing cooling techniques and working to ensure smaller blades and vanes can handle stresses. Gaps within the core – such as those between blades themselves and between blades and the housing – also present challenges.

“If you make the blade half the height, and have the same clearance, that clearance has a much more negative effect,” Nerone says. “You have to find a way to shrink that clearance the same percent you shrunk the blade.”

“This is going to take some pretty significant technological jumps to make it happen,” he adds.

Those tests will help NASA build models and other tools that will aid demonstrations with GE that are scheduled to take place in about three years, also at Glenn. The GE work will involve testing how an engine operates with 10-20% of its power extracted as electricity.

“If we can demonstrate 20% [extraction]… we are opening the door for a lot of hybrid and electric technologies down the road,” Nerone says.

By comparison, Boeing 787s draw about 5% of engine power as electricity.

NASA views HyTEC as critical to helping the USA secure an engine-technology lead amid increasing aerospace competitive threats, including those from China.

“Our goal with this project, and this subsonic strategy in general, is to really strengthen US industry in this field,” says Nerone. “Working with industry, [we] can make sure that the US industry does maintain that leadership, and that our engines and our aircraft are the best.”