The company said on 2 December the contract will support “preliminary development activities” on its bid to perform a so-called “core upgrade” on the P&W F135 engine that powers the Lockheed jet. 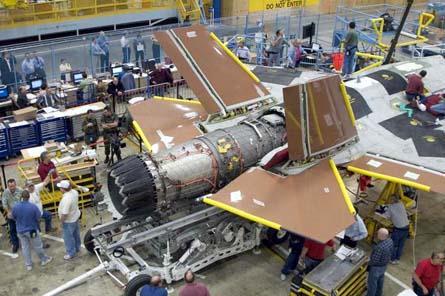 “Upgrades like this are a normal part of any major defence programme and the F135 engine has been pushed beyond its original specifications for too long,” says Jill Albertelli, president of P&W’s military engines business.

Advances in the F-35’s onboard sensors have substantially increased the aircraft’s power and cooling needs, surpassing the design envelope in the type’s F135 engine.

In response, the USAF solicited bids for a replacement powerplant, funding development of so-called “adaptive engines” from P&W and GE Aerospace.

However, P&W also submitted a separate proposal it calls the Enhanced Engine Package (EEP). Billed as a core upgrade to existing F135s, P&W says such an option will be a substantially cheaper, and faster, means of addressing the power issue.

It adds that the EEP upgrade is the only F-35 propulsion option that is a “drop in” solution for all variants of the jet.

Currently, the adaptive engine designs are incompatible with the short take-off and vertical landing F-35B variant, operated predominantly by the US Marine Corps (USMC) and UK.

This, combined with the greater expense of full engine replacements, has led the US Navy, which operates the F-35C carrier variant, and USMC to withhold support for such a path.

The USAF has yet to announce a formal decision in the engine saga. However, service leaders say they are planning for a resolution by year end.

“We would like to get through a decision this year,” said USAF chief of staff General Charles Brown in September at the 2022 Air & Space Forces Association conference in Washington DC.

The recent $115 million contract does not represent a formal decision on the matter, but will fund preparatory activity through 2023 for a subsequent rolling out of EEP, P&W says.

The award could be an indicator the USAF is leaning toward EEP over a full engine replacement.

The service in August launched a separate effort to develop an adaptive engine for its secretive sixth-generation fighter programme known as Next Generation Air Dominance.

The USAF allocated some $5 billion to the advanced propulsion initiative, dubbed Next Generation Adaptive Propulsion.