The Royal Norwegian Air Force has conducted its first domestic flights with the Lockheed Martin F-35A Lightning II, after a trio of the fifth-generation type touched down at its Ørland air base early this month.

Oslo's lead arrivals from an eventually 52-strong fleet of the conventional take-off and landing fighter were formally welcomed during a ceremony held at the base on 10 November, following their formal acceptance by its Defence Materiel Agency.

The F-35As had landed at Ørland on 3 November, after a 9h 22min delivery flight from Lockheed's Fort Worth plant in Texas conducted by US pilots. They were met on entering Norwegian airspace by a pair of Lockheed Martin F-16s – the type they will be replacing in service.

Norway has so far received 10 F-35s, including four that will remain permanently at the US Air Force's Luke AFB in Arizona to support Norwegian and multinational pilot training. The jets flown to Ørland early this month are its most recent examples, carrying the tail numbers 5148-5150, while its other seven aircraft are currently in use at Luke AFB. 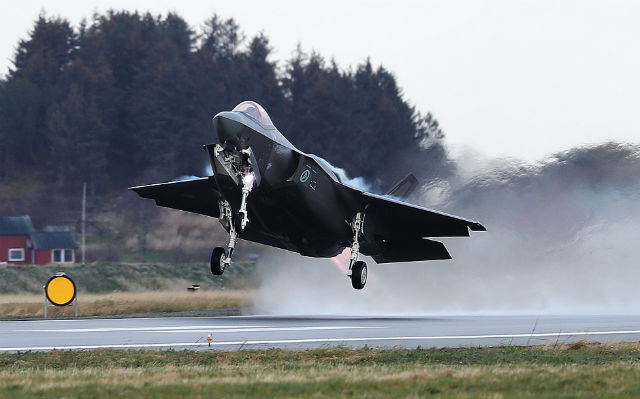 "This marks the start of reaching the next milestone: making the aircraft combat ready," says Royal Norwegian Air Force chief of staff Maj Gen Tonje Skinnarland. The new type is scheduled to achieve initial operational capability status with the service during 2019, and to be declared fully operational in 2025.

"The F-35 remains crucial to the continued modernisation of our armed forces, and our ability to preserve Norwegian and allied security and interests," says defence minister Frank Bakke-Jensen.

"From 2018, Norway will receive six aircraft annually up until, and including, 2024," the nation's defence ministry says. Maj Gen Morten Klever, its F-35 programme director, notes that Oslo's acquisition is "delivering on all key criteria: time, cost and performance".

Lockheed on 6 November announced that it has delivered a full-mission simulator for the F-35 to Norway. Once operational at Ørland, this will be used to deliver "pilot qualification, continuation and mission-rehearsal training", it says.

Meanwhile, a braking parachute modification developed to support Norwegian operations on short and icy runways will be tested at Eielson AFB in Alaska late this year, Lockheed says. Oslo's aircraft will also be equipped with the Joint Strike Missile, which is being developed by Kongsberg Defence Systems. To be carried internally by the F-35, the 4m (13.1ft)-long, 416kg (916lb) weapon will be capable of attacking land and maritime targets from a stand-off range of up to 150nm (277km).

"More than a dozen Norwegian companies are helping deliver the F-35, from manufacturing parts to providing services across the programme," Lockheed says.