A current grounding of the entire Lockheed Martin F-35 fleet has no bearing on the UK’s plans to order the fifth-generation type, according to defence secretary Philip Hammond.

Speaking to reporters after attending a naming ceremony for the new Royal Navy aircraft carrier HMS Queen Elizabeth at Rosyth dockyard in Scotland on 4 July, Hammond said the grounding – imposed the previous day – was “unfortunate”. However, he notes: “It’s the kind of thing that happens in aircraft development programmes.”

While Hammond says the Ministry of Defence “would very much like it to be here for Farnborough”, he adds that “we are not going to take any chances with safety”. One of the short take-off and vertical landing F-35Bs which has been scheduled to appear at the show after making a debut appearance at the 11-13 July Royal International Air Tattoo (RIAT) is UK-owned aircraft BK-3. 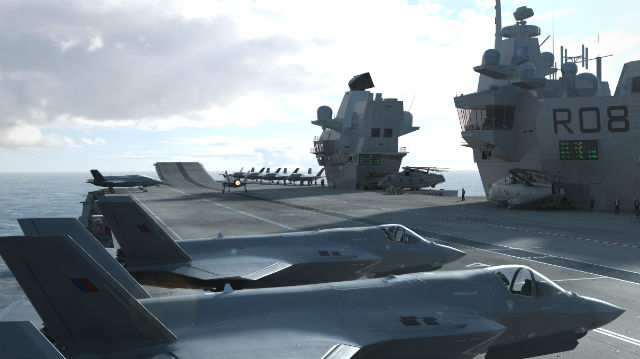 The MoD is close to placing its first production order for the F-35, with an expected acquisition of 14 of the type. Hammond recently suggested that a purchase could be announced around either the RIAT or Farnborough shows. It has previously ordered four of the aircraft to support initial operational test and evaluation and training activities.

Hammond says the current suspension of flight activities with the Joint Strike Fighter has “no impact on our process at all. I am looking to get the best bargain I can for the taxpayer,” he adds, while describing the remaining steps to signing a deal as being “a matter of commercial negotiation.”

The UK will operate its F-35Bs from the Royal Air Force’s Marham base in Norfolk, and also from the deck of the 65,000t HMS Queen Elizabeth.

Hammond says a decision on whether to introduce second-of-class ship HMS Prince of Wales will be taken as part of a Strategic Defence and Security Review next year. Pointing to a projected total spend of £6.4 billion ($10.9 billion) on the two vessels, he notes that the MoD “should pull out all of the stops to operate both of them”. However, a decision will be reached as a trade-off between “strategic capability and cost”, he adds.