The F-35 Joint Strike Fighter is on track to meet the US military’s planned initial operating capability (IOC) targets from late 2015, a senior programme official says.

With the 100th example having recently been rolled out from Lockheed Martin’s assembly line and contracts signed for the sixth and seventh lots of low-rate initial production, optimism is increasing, says F-35 weapons system programme manager Capt Paul Overstreet.

“The F-35 is finally on a realistic timeline, and there’s steady progress being made on all fronts,” he says. “Production is very stable, and the price is coming down, which is critical for the programme.”

Overstreet says development testing of the Block 2B software required for the USMC’s operational jets is running around one month behind schedule, having been affected by sequestration cuts and a brief, fleet-wide grounding order that affected the short take-off and vertical landing F-35B earlier this year. However, he notes: “We are very confident that the US Marine Corps will be able to declare IOC during 2015.” 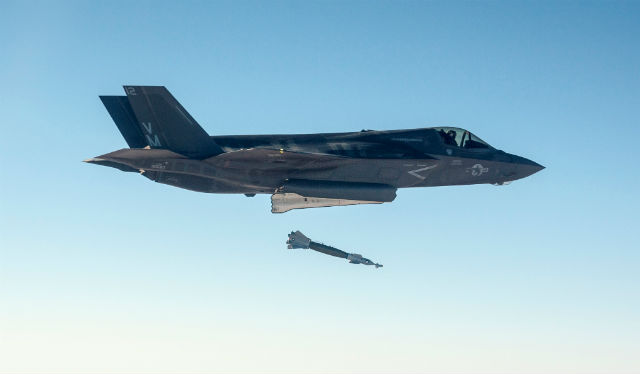 The USMC will be the first service to use the type operationally, with the US Air Force due to achieve the same milestone in 2016 and the US Navy two years later.

Speaking at IQPC’s International Fighter conference in London on 13 November, the Joint Program Office representative said flight testing involving a new tailhook design for the carrier variant F-35C should be completed at the US Navy’s Lakehurst site in New Jersey “next month”. The type should begin its first carrier-based trials “late next summer”, he adds, on the way to a first active duty deployment in the fourth quarter of 2018.