Safran Helicopter Engines (SHE) and transmission specialist ZF Aerospace Technology have deepened their collaboration on a new turboprop engine they intend to bring to market initially for military unmanned air vehicles (UAVs).

Although the partners do not have a launch platform for the Ardiden 3TP, they are clearly eyeing the twin-engined medium-altitude, long-endurance (MALE) platform being jointly developed by France, Germany, Italy and Spain. First flight of the UAV is tentatively set for 2024, with deliveries beginning late in the decade. 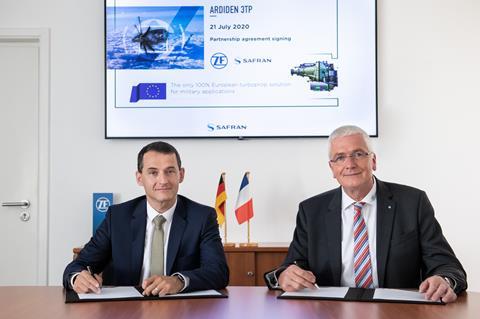 Based on the core of SHE’s Ardiden 3 turboshaft, technologies on the new powerplant were initially matured on the Tech TP demonstrator built as part of the EU’s Clean Sky initiative and in ground test since 2019. ZF is to supply the propeller and accessory gearbox for the engine.

Florent Chauvancy, executive vice-president of OEM sales at SHE, speaking on a 21 July webcast press briefing to celebrate the signing of a memorandum of agreement with ZF, said that although the pan-European is one opportunity, the engine has not been “specifically” developed for that 11t platform.

Chauvancy declines to elaborate on any discussions with Europe’s OCCAR procurement body, which is spearheading the development of the new UAV.

While he acknowledges the development timeline of the Ardiden 3TP – which would see it fly in 2022 – is compatible with the European MALE’s schedule, “it could be something else and we could fly sooner if required”.

However, both partners were at pains to underline the “European” nature of the engine. “Having a European engine is hopefully a clear asset for the programme,” he says.

Advantages include military sovereignty and a design that is free of components restricted by ITAR rules, says Chauvancy. 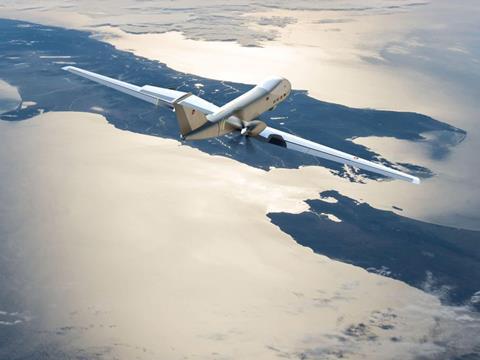 SHE has established a network of suppliers across Europe for the programme, including troubled Italian company Piaggo Aero, which is in extraordinary receivership and could be sold to new owners outside the EU.

Chauvancy defends the inclusion of the Ligurian engine specialist, noting that the contract with the firm covers what is essentially “build-to-print” parts production, rather than an exchange of intellectual property.

However, he cautions: “If there is any potential trouble with the company, due to the nature of the partnership we would have to work with either another Italian partner or other European entities.”

Although civil applications for the 1,700-2,000shp (1,260-1,490kW) powerplant will be considered in future, Chauvancy says launching the engine into the military market first made most sense, particularly given its strong relations in the defence space with the French and German governments.

“We have not said ‘no’ to civil applications… But we believe a military application is a good one to start with.”

Technologies incorporated on the Ardiden 3TP include a full authority digital engine and propeller control system, as well as the architecture which will help to ensure “proper durability and endurance”, says Chauvancy. Fuel consumption will also be 15% lower than current engines, he says.

In addition, the powerplant will be capable of “hybridisation” in the future, although the exact architecture has yet to be decided, he says. Hydrogen is also likely to play a part in the future, he adds.

ZF will shortly begin work on the gearbox design, having “having focused up to now to understand perfectly the technical needs”, says Siebert.

Aside from ZF, German industry is providing another key supplier in the form of MT Propeller.