Announced on 18 July, the validation from the Czech Republic’s Military Aviation Authority was carried out in line with continent-wide NATO/European Defence Agency standards. 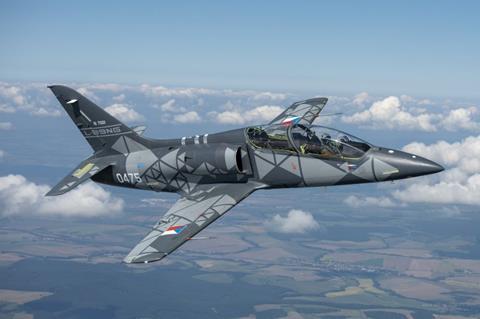 Aero says it has already secured two sales agreements, with Vietnam and Hungary, to provide each country with 12 of the single-engined L-39NGs. All Vietnam’s jets are the training variant, while Hungary has opted for eight trainers and four in a reconnaissance configuration.

The NG will ultimately be available in three variants: trainer, reconnaissance/patrol and light-attack.

Aero says it expects to begin deliveries to Vietnam in July 2023, with Hungary’s jets arriving the following year. A separate deal with the Czech air force is also being worked on, the manufacturer says.

“Through this collaboration… we have a unique opportunity to establish the presence of Aero in the US market,” says chief executive Viktor Sotona, which will be the first opportunity to bring the upgraded L-39NG to North America.

For the roughly 700 legacy L-39s still in service with 60 countries around the world, Aero says it can offer a modernisation package involving engine and avionics upgrades.

Sotona, who arrived as chief executive less than a year ago, notes that his current business strategy is to focus on converting customers already using the L-39 to the NG airframe. “Our sales strategy is to address the existing markets,” he says.