“Our goal for FA-50 exports to the world is 1,000 units within 10 years,” says Lee Bong Keun, vice-president and general manager of KAI’s international business division. 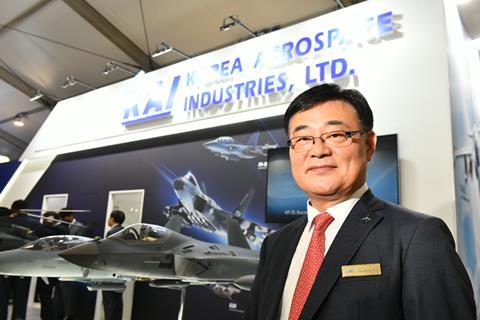 This number includes requirements from the US Air Force (USAF) and US Navy for additional training aircraft, as well as the need for “red air” aircraft to serve in aggressor missions.

Lee also sees opportunities to replace obsolete Northrop F-5 fighters in service with global air forces. In addition, Russia’s international isolation following its invasion of Ukraine could mean that countries may look to replace ageing Russian equipment with alternatives such as the FA-50.

Lee made the remarks to FlightGlobal at the Farnborough Airshow. In June, KAI and Lockheed Martin entered into an agreement to enhance the international marketing of the T-50, on which the FA-50 is based.

“As a light combat aircraft, the FA-50 is proven and mature,” adds Lee. “Frankly, we’re better than other competitors.”

The Philippine air force, which operates 12 FA-50s, has used the type in combat operations against insurgents on the southern island of Mindanao.

Lee adds that Manila is considering doubling its fleet to 24 examples, and that dialogue has taken place about this possibility.

Thailand, which operates 14 T-50THs and has orders for two, also represents potential for additional sales because it will need to replace its F-5 and Dassault Alpha Jet fleets.

The FA-50 is equipped with a multi-mode radar, glass cockpit, fly-by-wire control, and is powered by a single GE Aviation F404 engine. It also has a radar warning receiver, a countermeasures dispensing system, and a tactical datalink in the form of Link-16. KAI says it is also capable of air-to-air refuelling – in late 2020 Cobham Mission Systems said it would deliver an inflight refuelling capability for the type.

The FA-50 can also carry a range of precision munitions.

Boeing, for its part, has also expressed bullishness in the market for the trainer/light-attack market. In 2019, it projected that its T-7 – which beat a Lockheed-derived T-50A in the USAF’s pivotal T-X competition – will enjoy 2,600 sales over its lifetime.

Cirium fleets data indicates that there are 210 T-50 variants in service globally, of which the majority (146) serve with the Republic of Korea Air Force. International operators include Indonesia, Iraq, the Philippines, and Thailand. Lockheed is also listed as operating two examples.