Leonardo Helicopters will in 2025 begin flying a new 3t-class uncrewed rotorcraft for the UK Royal Navy (RN) under a £60 million ($71 million) contract revealed on 21 July.

The four-year contract will see the airframer’s Yeovil site in southwest England develop a helicopter prototype – referred to as “Proteus” – capable of deploying sonobouys for anti-submarine warfare missions. 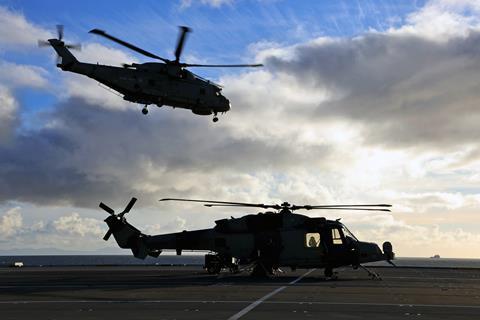 But the rotorcraft, which Leonardo says will weigh “up to 2-3t”, will also be tested for other roles including ship-to-ship resupply and casualty evacuation.

The MoD says if the project is successful “the new aircraft would provide a platform capable of delivering improved surveillance and intelligence, enabling crewed Royal Navy helicopters to re-deploy on alternative missions”.

In a recent policy document, the MoD outlined its intention in the future to increasingly deliver find, strike and lift capabilities using uncrewed and autonomous systems.

Adam Clarke, managing director of Leonardo Helicopters UK, adds: “Uncrewed VTOL aircraft will transform military capability whilst also having application in other market sectors, both in the UK and around the world.

“This contract represents a major step towards our future in next generation uncrewed military technology and the sustainment of unique engineering skills onshore.”