Leonardo Helicopters has begun setting up a production line at its Yeovil plant in the UK for the AW149 and could be in a position by year-end to begin building the super-medium-class platform at the site.

The rotorcraft is a candidate for the UK’s New Medium Helicopter (NMH) requirement, which is seeking up to 44 helicopters to replace several types in Royal Air Force and British Army service. 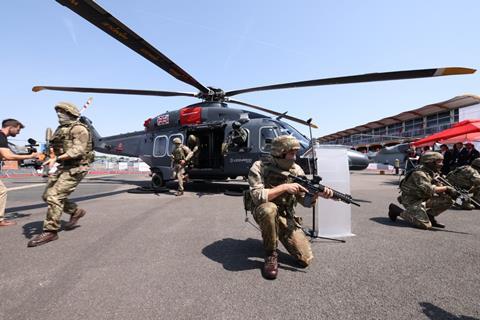 Activities to support the establishment of the final assembly line began early in 2022, says head of UK campaigns Mike Morrisroe.

These included the secondment of UK staff to the company’s current AW149 line in Vergiate, Italy “working the build of the aircraft” alongside Italian colleagues.

Although the Yeovil site previously assembled the related AW189, additional tooling and jigs specific to the AW149 have been ordered over the last three months, says Morrisroe.

Based on current delivery times of that equipment “by the end of the year we will have sufficient [tooling] to start building an aircraft,” he says.

“We are putting the tooling in place so that if we get an order from the UK we could move at pace.”

He estimates that delivery of an initial aircraft could take place within 12-14 months of contract signature, although notes that customer-specific modifications could lengthen that process.

However, Morrisroe says he “cannot confirm at this stage” if the manufacturer would build an AW149 at Yeovil as a trial run ahead of any contract award.

If selected for the NMH requirement, Leonardo would build examples for the UK, plus those for export, in Yeovil. 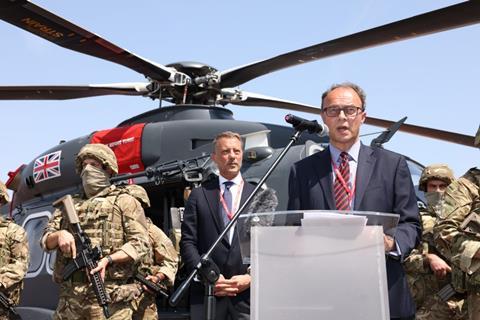 Parked outside the company’s Farnborough chalet, the AW149 at the show was used recently for weapons integration trials conducted in an undisclosed European country, understood to be Hungary.

Guided and unguided rockets, carried on a brand-new weapons station, were fired from the helicopter, the programme’s sixth pre-production aircraft.

Leonardo had previously used what it called the “common platform demonstrator” – a rebadged AW189 – to promote the AW149 in the UK.

But Morrisroe says the switch was made as it offers “a good demonstration of a lot of the [mission] kits that are already on the shelf or that we are in the process of qualifying.”

Gian Piero Cutillo, managing director of Leonardo Helicopters, says the AW149 has a “great future” in terms of its export potential.

“I am really confident… that this is the right product for the UK, and I am confident that it meets all the requirements.” Its selection would be a “win-win situation for the UK and for Leonardo”, he adds.

Speaking at later briefing, Leonardo chief executive Alessandro Profumo refused to be drawn on the future of the Yeovil plant if the AW149 does not win the NMH tender.

Stressing that he is confident the helicopter “will win”, he adds: “The day we don’t win we will take a decision. I don’t want to blackmail anyone by saying we will close Yeovil.”