The US lessor already held orders for 31 737-800BCFs, meaning the fresh deal brings BBAM’s commitments to 40 of the type. 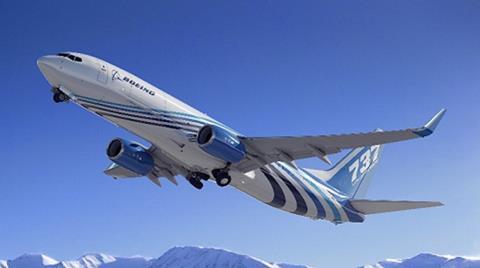 “We have a number of customers lined up for the aircraft,” Lynch says of the 737-800BCF. “We are seeing a lot of interest in them. We see more customers than we have aircraft available”.

BBAM is set to be the customer to take delivery of the first 737-800BCF completed at a Kelowna, Canada conversion facility operated by maintenance provider KF Aerospace, says Boeing. KF intends to open two 737-800BCF conversion lines at Kelowna in 2023.

Boeing now holds orders for more than 250 737-800BCFs, says the airframer’s vice-president of commercial services sales Anbessie Yitbarek. Boeing has reported strong demand for all its freighters, the 737-800BCF included.

In recent days, the company said it is opening a second 737-800BCF conversion line at a company operated Gatwick conversion facility.

Boeing has also partnered to produce 737-800BCFs in Costa Rica and the Chinese city of Guangzhou.