Rolls-Royce has become the latest engine manufacturer to launch trials of liquid hydrogen combustion and plans tests using several of its current powerplants in a project that could culminate in flights of a hydrogen-fueled Pearl 15 business jet engine.

As an initial step, ground runs of an AE 2100 turboshaft fueled by liquid hydrogen – the same engine previously used to test its PGS1 turbogenerator system – will commence later this year in the UK. 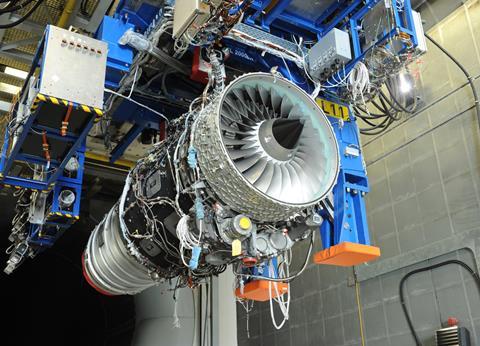 This “early concept feasibility” phase will provide a “really good early indication of hydrogen combustion, how we control it, how it can work, and it will give us some clues about some of the other areas we need to work on”, says Alan Newby, director aerospace technology and future programmes at Rolls-Royce.

Previous research suggests that only “a relatively straightforward modification of the fuel injector itself” will be required to allow the engine to run on hydrogen, rather than a complete redesign of the entire combustion chamber, he adds.

The AE 2100 tests will be followed, at an undisclosed date, by ground runs of a Pearl 15 business jet engine converted to run on the fuel using a “much more representative system”.

This activity will be divided into two phases: firstly, Rolls-Royce will demonstrate that the hydrogen system can be separated from other non-combustion functions performed by conventional fuel, such as heat management.

“Once we have done that, we will actually go and run the engine on hydrogen,” he says.

“That will give us really good confidence to understand all of the challenges associated with a gas turbine running on liquid hydrogen.”

Several locations are under consideration for this part of the programme, including Rolls-Royce’s test site at NASA’s Stennis Space facility in Mississippi, the USA.

Newby says the project could ultimately transition to flight trials of the hydrogen-burning Pearl 15 aboard the company’s Boeing 747 flying testbed.

However, the manufacturer has not yet committed to this element of the programme. “We need to understand if there additional benefits from going and taking a flight test on the engine.

“The question for us is do we learn more at system level from running a hydrogen engine at altitude. We are going through a lot of work internally to see what the additional benefit is beyond ground testing.”

Newby says the Pearl 15 is ideal for the evaluations as it combines a compact size with internals that match those of a larger engine.

“If we do want to flight test it there are probably more opportunities with that rather than a bigger engine,” he says.

The project is partly internally funded, with the engine maker seeking additional backing from both the UK’s Aerospace Technology Institute and the EU’s Clean Aviation programme.

Rolls-Royce has already been engaged on numerous projects with both airlines – including EasyJet and Norway’s Wideroe – and research bodies, to better comprehend the operational and technical challenges of using hydrogen as a fuel.

“We have done a lot of work to understand the fundamentals,” says Newby.

But he notes that its test programme aligns broadly with Airbus’s stated timelines for aircraft development under its ZEROe effort.

Newby says Rolls-Royce “respects” that decision, but adds: “What we want to make sure is when [Airbus] get to the point when they say we are going to do a new aircraft in year x… that we have got the technology ready and that they have a choice of powerplant.”