FARNBOROUGH: Airbus battles to get A400M back on track

Airbus’s military transport aircraft unit will arrive at the Farnborough air show amid an unwelcome gearbox crisis linked to its poster-child A400M – a model for which adding promised tactical capabilities was already proving harder than expected.

In Flight International’s news report from the 2014 Farnborough show, the Atlas’s first year of operational service was summed up as marked by “solid reliability from its [Europrop International] TP400-D6 engines”. Two years on, the project is in disarray, with a reliability issue affecting an engine power gearbox component currently requiring users to follow operating restrictions.

Airbus was from mid-June flight-testing an interim fix for the reliability issue, which concerns a component called an input pinion plug’ supplied by GE Aviation company Avio. Inspections performed on operational aircraft following an uncommanded engine shutdown involving a UK Royal Air Force example early this year found cracking on some pins. The issue concerned only gearboxes linked to the aircraft’s clockwise-turning propellers.

Gearbox inspections have since been required after every 200 flight hours, but the interim solution – expected to be certificated during the “summer period”, after 100h of on-wing testing – is likely to increase this interval to 600h.

For Airbus, the gearbox issue detracts from the wider performance of the TP400 turboprop. Aircraft operating in a basic logistic transport standard have been performing well, the company says, and the Atlas has demonstrated an ability to carry a 25t payload some 500nm (925km) further than its contractual specification, laid down by launch nations Belgium, France, Germany, Luxembourg, Spain, Turkey and the UK.

By mid-June, Airbus had delivered 26 A400Ms, with France receiving nine, the UK eight, and Germany, Turkey and lone export customer Malaysia three each. Further deliveries in 2016 will include a first unit for Spain, but the airframer is for now unable to say how many will be shipped in total, against a target of “20-plus” outlined earlier this year by Airbus Group chief executive Tom Enders. With the company already having its own challenges during the production ramp-up – such as a now-resolved problem with the quality of fuselage production in Bremen, Germany – the need to divert some engines to customers from its final assembly line in Seville, Spain, is an added hurdle.

One bright spot came on 8 June, when the French air force accepted its first A400M in a new tactical transport standard, which adds ballistic protection, defensive aids system equipment and an airdrop clearance. Paris expects to receive another two new aircraft prepared to this standard this year, and to have three of its in-service examples retrofitted.

The tactical advance is a significant step for Airbus Defence & Space, as it continues to talk to its customers via Europe’s OCCAR defence procurement agency about a new delivery schedule and associated penalty payments. Airbus expects to reveal more when it makes its next financial results statement, but none of the programme’s launch nations is understood to have requested reducing the total number of aircraft, from an overall 174. 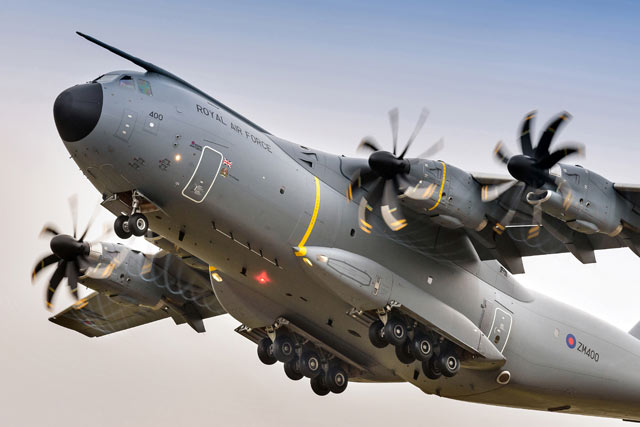 The A400M has performed well in its basic logistic transport role, but export sales are in limbo pending resolution of gearbox troubles

With Boeing’s C-17 now out of production, Airbus Defence & Space should have been in the driving seat for lucrative export orders. Head of military aircraft Fernando Alonso says the company is holding firm on its projection of selling at least 200 A400Ms to other nations over the life of the programme. It has by no means given up on its earlier ambition of further developing the Atlas for operation by the US military, but any further sales are unlikely until its current challenges have been overcome.

Thankfully for the company, the situation is more positive elsewhere within its product portfolio – especially with the A330 multi-role tanker transport (MRTT).

To date, Airbus has delivered 27 of the aircraft, to the UK (13), Saudi Arabia (6), Australia (5) and the United Arab Emirates (3). A 14th and final example will be accepted under the UK’s Future Strategic Tanker Aircraft programme around the time of the show, and a further two (second-hand) aircraft are to be converted for Australia.

Other confirmed buyers are France, Singapore and South Korea, while contracts are pending for India and for a pooled fleet to be operated initially by Luxembourg, the Netherlands and Poland. Once combined, these deals will increase the number of A330 tankers to 49, and Airbus thinks that, in all, deals for up to 85 could be made over the next 10 years.

Controversially, Airbus Defence & Space head of sales and marketing Jean-Pierre Talamoni contends that the US Department of Defense twice cancelling a selection of the A330 tanker for the US Air Force’s KC-X requirement has played into Airbus’s hands. “The Americans made the greatest gift to us – selecting us and then deselecting us. It saved us a lot of money,” he notes. But Boeing’s 767-based KC-46A will be a fierce opponent, once through its current development and flight-test challenges, which are reminiscent of its rival’s past problems with the MRTT.

Airbus recently achieved the power-on milestone for Singapore’s first MRTT, with this and future examples to benefit from continual investment in the widebody made by its commercial arm over the past several years. This includes new avionics equipment, aerodynamic enhancements and an increased maximum take-off weight of 238t. New technologies – such as an autonomous boom refuelling capability – are currently being researched, and customers are being offered more advanced communications equipment, and the ability to potentially undertake communications and electronic intelligence tasks from the platform.

Another of the company’s success stories of recent years is the C295 medium transport, which – despite encountering a recent dip in sales – appears poised to secure further business.

Discussions continue over a proposed 50-unit deal to replace the Indian air force’s vintage Avro HS 748s, with the C295 – to be produced with local partner Tata in accordance with New Delhi’s “Make in India” industrial policy. Alonso says the company is “very optimistic” of completing the sales process.

Also nearing possible conclusion is a competition to replace the Royal Canadian Air Force’s de Havilland Canada DHC-6 Buffalos and some aged Lockheed Martin C-130s for a fixed-wing search-and-rescue requirement likely to require the provision of 16 or 17 aircraft. Rivals include the Leonardo Alenia C-27J Spartan and Embraer’s KC-390.

“Canada – it’s life or death for the Italians, who are trying to sell [the C-27J] at any price,” claims Talamoni.

Airbus has so far won orders for 168 C295s from 25 operators, with roles ranging from transport to maritime patrol, anti-submarine warfare and other special-mission roles. FlightGlobal’s Fleets Analyzer database shows 144 of the type as in current active service.

Deliveries will continue this year for lead operator Egypt – which has received 21 from an eventual 24 – and Mali, and “there are a number of mature discussions for the C295, and some very good opportunities,” says Fernando Ciria, head of marketing, tactical airlifters & intelligence, surveillance and reconnaissance. The company earlier this year conducted a demonstration tour around Latin America using a Mexican-owned and winglet-equipped C295W, and in late June repeated the process in Canada and the USA.

With a firefighting adaptation nearing certification, a roll-on, roll-off tanker fit in flight-test, offers of a cannon-armed version and airborne early warning and control system variant, Airbus believes there is much life left in the design.

“There is still a lot that can be got out of the C295 – we have the capability to add new functions quickly,” Alonso says. “At Farnborough, we will show new capabilities, and the timeframe when customers can get them.” Noting that the company is in no hurry to develop a replacement, he adds: “We have a winner for the period before we get to a new product.”

For Airbus’s sake, he will be hoping that the same can soon also be said of the A400M.