The Irkut-built Yakovlev Yak-130 trainer almost failed to get off the ground for its Farnborough debut because of a misunderstanding with air traffic authorities, vice-president Konstantin Popovich has revealed.

During a media presentation intended to highlight the capabilities of the advanced jet and combat trainer, he said one of the type's innovative design features had caused more than a bit of confusion.

"We had problems on the first day at the show. We were told that we couldn't take off because our air intakes were closed," said Popovich, who is also head of the Yakovlev engineering centre.

Irkut officials had to swiftly explain that the Yak-130 is equipped with fly-by-wire system-controlled engine-intake blanking doors, which are intended to prevent the aircraft's engines from sustaining foreign object damage when operating on unprepared runways or grass strips.

While conceding that this is perhaps a "peculiar feature", Popovich said the company was surprised by the concerned reaction. "The tower still asked if we were sure the aircraft can take off like this," he added. 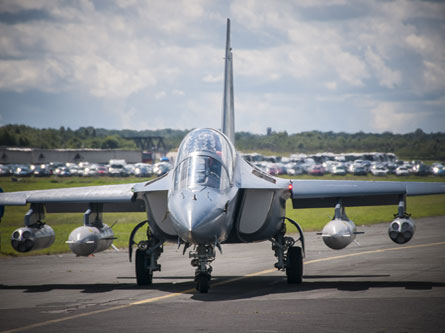