The ‘Tankbuster’ still lives up to its name.

Results of recent live fire testing by the US Air Force (USAF) found that, 50 years after its inception, A-10C Thunderbolts can still crack open the armour of modern main battle tanks.

More commonly known as the Warthog, the ground attack airframe was originally produced in 1972 by Fairchild Republic. Designed to kill tanks in close air support, the A-10 was built around a titanium ‘bathtub’ cockpit, intended to protect the pilot and the General Dynamics 30mm GAU-8A Avenger cannon. It uses two GE Aviation TF34-GE-100 turbofans mounted prominently above the tail section of the aircraft. 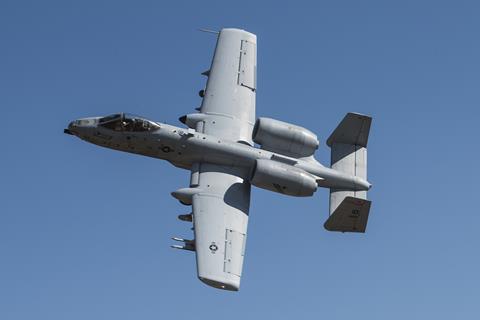 The A-10C Thunderbolt, more commonly known as the Warthog, has seen combat service in conflicts from the Persian Gulf War to the anti-ISIS campaign in Syria

On 6 May, the USAF released the results of what it calls the first-ever test of the A-10’s main cannon against explosive reactive armour (ERA). The tests were conducted in February.

ERA is a type of secondary armour, primarily incorporated into main battle tanks. It uses blocks of explosive, sandwiched between thin plating, laid on top of the vehicle’s primary heavy metal armoured plating. The explosive panels are designed to protect the tank from explosive warhead weapons like anti-tank missiles, which use a jet of molten metal to penetrate conventional armour. ERA creates a counter-explosion to scatter the jet before it can breach the hull.

The first known use of ERA in combat was by the Israel Defense Forces during a conflict in Lebanon in the 1980s, about a decade after the A-10’s first flight. ERA has since been incorporated into the main battle tanks of the USA, the UK Britain, Germany, Russia, India and other modern militaries.

While the technology has proven effective against explosive warhead weapons like the Soviet RPG-7, it is not designed to counter direct-fire projectiles like the A-10’s 30mm cannon. 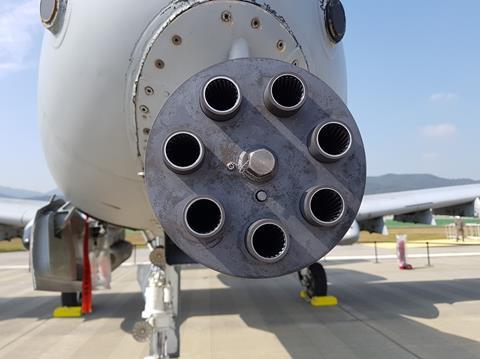 The USAF says the recent test pitted A-10Cs employing armour piercing incendiary rounds against two surrogate main battle tanks equipped with ERA. The A-10 pilots varied attack parameters and direction in order to evaluate weapons effects against the up-armoured targets. The Warthog’s cannon can also be armed with depleted uranium rounds, although concerns over health and environmental impacts have made their use controversial in recent years.

Using video analysis, photo imagery and visual inspection of the targets, the USAF says analysts were able to ascertain that the battle damage inflicted upon the tanks rendered them inoperative.

“This has been an ongoing test effort since the idea originated in 2020,” says USAF operations test analyst 1st Lieutenant Christopher Earle. “Now that it’s come to fruition and proven successful, we will work towards testing other types of anti-armour munitions in the air force inventory against ERA, and collect more data.”

The USAF says the tests prove A-10s can continue to deliver massive and rapid firepower with devastating effect on enemy vehicles in contested environments.