“The contract foresees the delivery and integration of 110 Captor-E radars for Germany and an initial batch of five for Spain,” Airbus said on 26 June. “The contract signature followed the approval by both governments in recent weeks,” it adds. 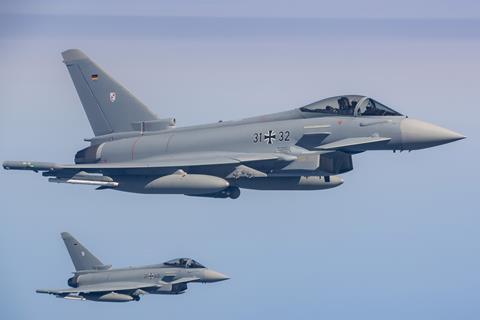 Slated for integration with Tranche 2 and 3 production-standard Eurofighters, the AESA sensors are due to be delivered by 2023. In addition to modifying operational assets, the Captor-E will also be fitted on a new batch of 38 aircraft likely to be ordered before year-end for the German air force.

Airbus notes that its sites in Manching, Germany and Getafe, Spain, will serve as integration hubs for the update, with radar development and production to led by Euroradar consortium partner companies Hensoldt and Indra.

In mid-June, Hensoldt valued its stake in the activity as worth more than €1.5 billion ($1.7 billion), and described the sensor as being in a Mk1 standard.

“With Eurofighter, Germany and Spain are investing in a strong backbone of European air defence and in the leading project of the European defence industry,” says Airbus Defence & Space chief executive Dirk Hoke.

Airbus believes the AESA advance “will also give an additional push to the export tenders Eurofighter is currently bidding for”. These include competitions in Finland and Switzerland.