All F-35s contain component made from Chinese-origin metal: Pentagon

The US Department of Defense (DoD) says every one of the more than 800 Lockheed Martin F-35 Lightning II fighters produced contains a component made from China-sourced metal.

The reveal comes from the Pentagon’s Joint Programme Office (JPO), which oversees the acquisition of F-35s for the entire US military and some foreign allies.

On 8 September, the JPO announced a temporary halt in deliveries of new F-35s, saying a subcontractor of Lockheed discovered that magnets it had been using in one of the jet’s systems were manufactured using a metal alloy produced in China. The JPO confirmed on 9 September that all tail numbers of the type are affected. 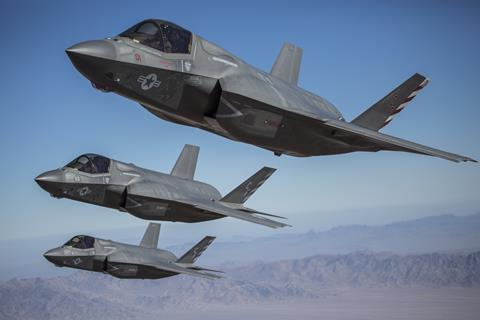 The freeze on new deliveries will remain in effect while an investigation into the airworthiness and information security ramifications of the discovery is completed.

“I’m hoping this can get resolved pretty soon,” undersecretary of defence for acquisition and sustainment William LaPlante said on 9 September.

The issue, he adds, does not appear to pose security or safety concerns. “But I’m waiting for them to finish what they’re looking at and come to me.”

The magnet in question is part of the F-35 turbomachine produced by Honeywell. The device is an integrated power system that combines functions of an auxiliary power unit and air cycle machine to provide ground power for maintenance and main engine start, and compressed air for thermal management.

The magnet itself is provided to Honeywell by an unnamed subcontractor, which sourced the raw cobalt-samarium alloy from China.

Under a rule known as the Defense Federal Acquisition Regulation Supplement (DFARS), defence manufacturers are restricted from using raw materials sourced from unfriendly nations like Russia, North Korea and China.

Lockheed and Honeywell say they are working with the DoD to address concerns. On 9 September, Lockheed said the magnet does not pose any flight safety issues, nor provide “any visibility or access to sensitive programme information” related to F-35s.

LaPlante acknowledges that, with some 1,700 suppliers producing components for the single-engined fighter, maintaining a firm grasp on the supply chain that feeds F-35s and other advanced weapons programmes poses challenges.

“It’s part of a broader issue which we call supply chain illumination,” he says, noting the Pentagon is striving for real-time tracking of supplies to maintain “integrity”.

LaPlante adds that tools like artificial intelligence software may offer solutions, but acknowledges that understanding the supply chain poses a “constant issue” for the DoD.

Following a review of the China-connected magnet, officials at the Pentagon and Lockheed will have to decide whether to replace the part or seek a waiver to the requirement.

Lockheed says that, if the magnet is determined to violate the rules, such a waiver would be needed to resume delivery. The F-35 has previously received such exemptions on the basis of prohibitive cost or delays.

Honeywell tells FlightGlobal it has stopped working with the supplier of the offending alloy. It anticipates delivering the components from an alternative US source from next month.

As long as no flight safety or security issues are found with the existing magnets, the DoD and Lockheed will likely pursue a waiver and “get the production line moving again”, LaPlante says.

The JPO says it does not expect to replace the component, which has not caused operational issues for the existing fleet, given the cost and time required for such retrofit. That makes the granting of a waiver to the previously completed jets a likely outcome.

More than 825 F-35s have been delivered worldwide, according to Lockheed.