Headline speakers, including US defence secretary Lloyd Austin and Northrop Grumman chief executive Kathy Warden, grabbed the spotlight at the 2 December unveiling of Northrop’s B-21 Raider in Palmdale, California – giving the world its first look at a sixth-generation aircraft and putting potential adversaries of the USA on notice.

However, the innovative stealth bomber will still undergo years of testing before it is deemed ready to deter foreign aggression and penetrate sophisticated enemy air defences. 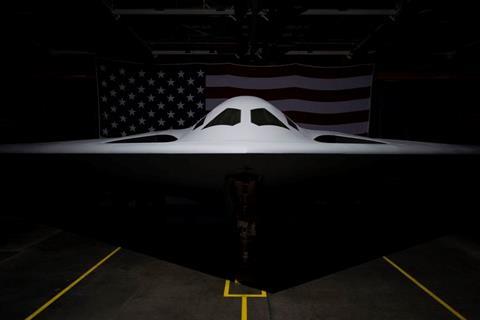 The next major milestone for the B-21 programme is the first flight of a test aircraft, known as T1, which is scheduled for some time in 2023. Flying that first mission will be the joint team of US Air Force (USAF) Lieutenant Colonel Clifton Bell and Northrop’s Chris Moss.

“There’s a few things in your career that you never expect to happen,” says Bell, who flew both the Boeing B-52 and Northrop B-2 bombers for the USAF. “Having the opportunity to bring forward the next generation of bomber is very exciting.”

The B-2 Spirit was the predecessor to the B-21, pioneering the stealth technology that Northrop says will allow the Raider to slip through advanced air defence systems, appearing all but invisible on radar.

Ahead of the T1 aircraft’s first flight, Bell says the test crew are spending plenty of time in “high-fidelity” simulators to both evaluate and “get comfortable” with the prototype’s flight control systems.

“Being able to execute those systems and know the difference between something going wrong and the way the system operates”, is how Bell describes one of the team’s main points of focus right now. “We spend a lot of time in simulators working on that.”

“We’ve actually had the chance to help develop the flying qualities of the aircraft,” adds Moss, Bell’s counterpart at Northrop.

Moss says he and Bell provide feedback to engineers to help improve what he calls the “handling qualities of the airplane”. The two have accomplished that through extensive simulator evaluations over the past six months, he says.

“We help figure out how to make it great,” he says of the B-21 prototype.

Although the 2023 first flight will be made using a test aircraft, Northrop says it aims to make that airframe as close to a final production model as possible, calling it a “production representative aircraft”.

Part of that effort has involved extensive testing of flight systems, both hardware and software, onboard a Gulfstream GV business jet, prior to installation on the B-21 test frame.

Northrop and the USAF say doing as much of that testing as possible “off the aircraft” will reduce risk and save costs on the B-21’s development cycle.

However, the test pilots acknowledge that flying a brand new aircraft is never without some risk.

“We can’t validate the model until we actually go and fly,” says Moss. “So all we can do is be prepared for everything that we think may be a problem, or could be a problem.”

He says the team is constantly drawing upon lessons from other flight development programmes, noting: “a lot of times, the things that surprised you the most are little things that you didn’t think would have any issues at all”.

Supporting the flight team are thousands of engineers, many of whom were on hand to witness the B-21’s first public appearance, who are developing the data objectives and test points Bell and Moss will fly on the Raider’s first mission.