China sends nearly 70 aircraft into Taiwan Strait, while US jets observe to the west

The People’s Republic of China (PRC) sent nearly 70 military aircraft into the Strait of Taiwan on 5 August, part of aggressive, live-fire military exercises China is conducting in the region.

Defence officials in Taiwan, the self-governing island that refers to itself as the Republic of China (ROC), reported the sorties and say via Twitter that 49 of the Chinese People’s Liberation Army (PLA) aircraft crossed the so-called median line of the strait, which serves as an unofficial boundary. 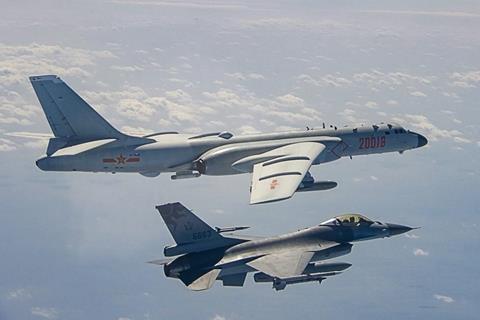 “The recent coercion from [the] PRC’s drills around us aimed to change the status quo of [the] Taiwan Strait, violated our sovereignty, and caused tension in the Indo-Pacific region,” the ROC Ministry of National Defence (MND) says in a tweet. “The ROC armed forces seek no escalation, but we succumb to no challenges and respond with reason,” the ministry adds.

The drills were launched following the visit of a high-ranking US official to Taiwan on 2 August. The PRC considers Taiwan its sovereign territory and has long discouraged other countries from engaging in official diplomacy with Taipei.

According to the MND, most of the PLA aircraft involved in the 5 August incursions were fighters, including seven Chengdu J-10s, six Shenyang J-11s, 10 Shenyang J-16s, and 24 Sukhoi Su-30s. Two Xian Y-8 turboprops configured for airborne early warning and anti-submarine warfare also crossed the median line. 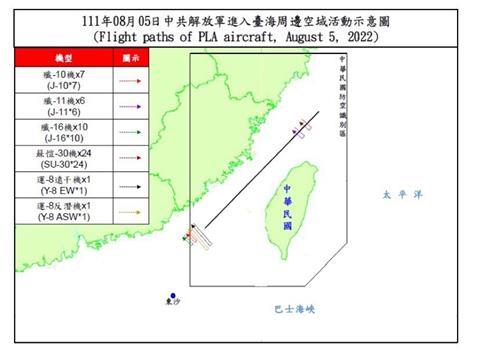 China routinely sends military aircraft into the Strait of Taiwan, but such events have become increasingly common in recent months according to MND figures. The day after US Speaker of the House Nancy Pelosi’s visit to Taipei, the PLA dispatched around two dozen jets across the median line.

The on-going drills, which include the firing of live missiles into the strait, have prompted the rerouting or cancellation of several commercial flights in the area. Civil aviation regulators in Singapore, Vietnam and Thailand have since urged their carriers to avoid the airspace around Taiwan during the 4 August to 7 August period specified in China’s notice of the exercises.

Additional information on the 5 August incursions was not immediately available. The MND website, to which the ministry’s official Twitter account directed users, was unavailable. Taiwan’s Military News Agency reports that the MND site was offline after being hit by a cyber attack.

Several other ROC offices were also disrupted by similar attacks.

In addition to the military drills, China’s foreign ministry also said on 5 August that the PRC is pulling out of several planned meetings with the USA on military coordination.

“The world must never allow the US to see itself as a ‘world policeman’ or an ‘international judge’,” the Chinese Ministry of Foreign Affairs said on 5 August via Twitter. It describes the USA as bullying and strangling other nations “at will”.

4.Suspending China-U.S. cooperation on the repatriation of illegal immigrants.

The South China Sea Strategic Situation Probing Initiative (SCSPI), which describes itself as an international research organisation tracking and publicising developments in the region, reported on 5 August that several US military aircraft were also flying in the skies just west of Taiwan.