Germany's air force has disclosed further details about the fatal collision between two Eurofighter combat aircraft that took place near Rostock on 24 June.

The pair were part of a formation of three single-seat Eurofighters practising an air combat mission at an altitude above 9,800ft, the Luftwaffe says.

During these exercises, two fighters intercept an opponent – represented by a third aircraft – and try to get into a position to strike.

The Luftwaffe says aircraft constantly change positions in a confined space at high speed during these exercises, and operate the mission as a visual flight.

Meteorological conditions for the exercise were "good", with few clouds and a clear sky, the Luftwaffe says. But two aircraft collided during the exercise and crashed in the Muritz lake district area in northeast Germany.

One of the pilots operated their ejection seat and survived with minor injuries, but the other pilot was killed.

The third pilot reported the accident and safely landed at the formation's base at Rostock airport. All three Eurofighters were part of the Luftwaffe's 73 Squadron. 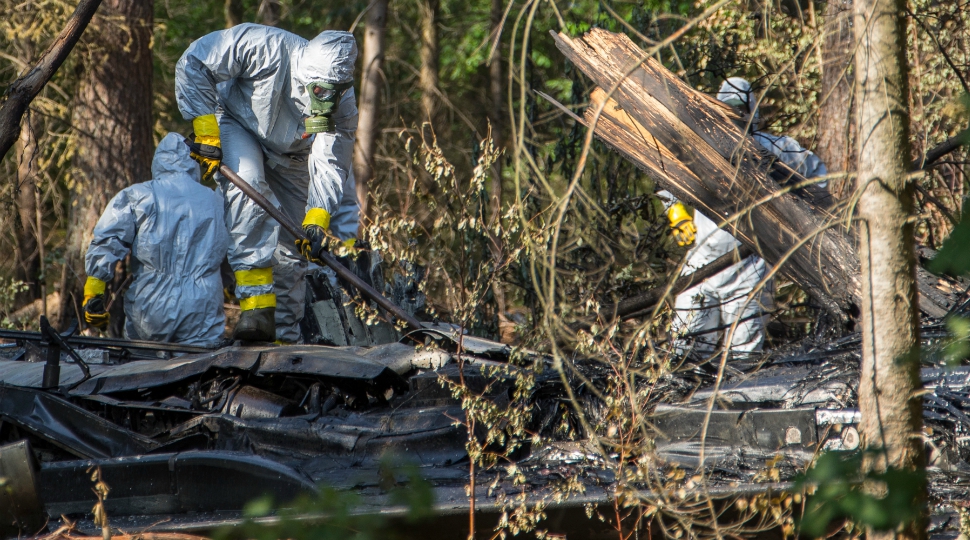 The Luftwaffe says that while much of its flight training can be completed in simulators, practising air combat skills under "real conditions" delivers "indispensable experience" for pilots.

In order to get accustomed to "high physical strain" during manoeuvres, influences such as heat, direct sunlight, speed and g forces "must be 'live' experienced", the Luftwaffe says.

Around 500 servicemen and women are involved in the search and salvage operation in the crash area.

The two Eurofighters involved in the accident were delivered in 2010, and had each logged a total flight time of around 1,000h, the Luftwaffe says.

An investigation by the Bundeswehr is under way to determine the cause of the accident.