The work took place at White Sands Missile Range in December 2019, according to Lockheed Martin. A pair of US Air Force F-35s were integrated with the US Army’s Integrated Air and Missile Defense Battle Command System (IBCS), with the fighters “providing an airborne sensor capability to successfully detect, track and intercept near simultaneous air-breathing threats.” 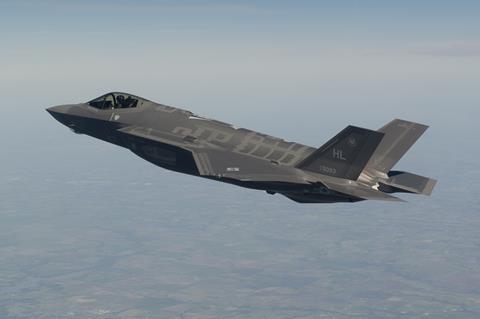 The aircraft and IBCS were connected through the Multifunction Advanced Data Link (MADL) in the proof of concept activity. It marked the first time F-35s were used as sensors during an IBCS live fire test against multiple targets.

“The F-35’s advanced sensors and connectivity enable it to gather, analyse and seamlessly share critical information with the joint fighting force to lead the multi-domain battlespace,” says Greg Ulmer, Lockheed Martin vice president and general manager of the F-35 program.

“This test validated the F-35’s capability to serve as an airborne sensor and extend the range of critical Integrated Air and Missile Defense interceptors.”

The company did not state the size of the targets engaged, but such a capability would prove useful against low flying targets such as cruise missiles.

The work also demonstrated a way to engage low-flying threats that are over the horizon or terrain masked.

The test followed previous work conducted in mid-2019 during an Orange Flag Evaluation in Palmdale, California and Fort Bliss, Texas. This was the first time that live F-35 tracking data was sent to IBCS via an F-35 ground station and F-35-IBCS adaptation kit, which were developed by Lockheed Martin.