The defence manufacturer, which is the prime contractor on the F-35 programme, confirms the aircraft is company owned, having not yet been delivered to the US Department of Defense (DoD). 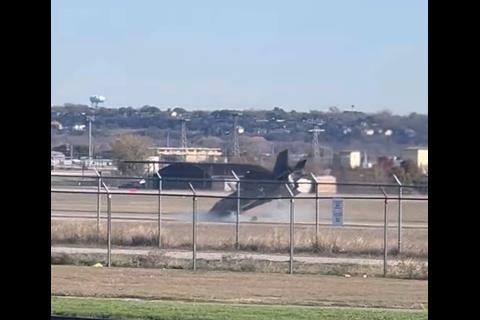 A Lockheed Martin-owned F-35B fighter jet crashed in Fort Worth, Texas on 15 December 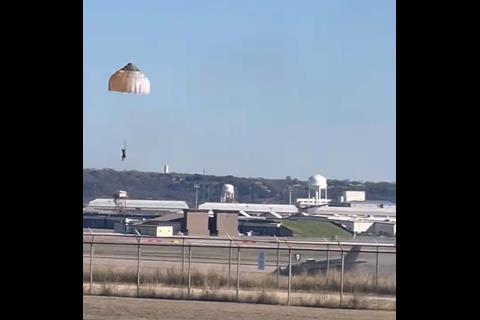 A Lockheed Martin-owned F-35B fighter jet crashed in Fort Worth, Texas on 15 December

Lockheed adds that the operator of the aircraft was a “US government pilot” rather than a Lockheed employee.

“We are aware of the F-35B crash on the shared runway at Naval Air Station Joint Reserve Base in Fort Worth and understand that the pilot ejected successfully,” Lockheed said on 15 December. “Safety is our priority, and we will follow appropriate investigation protocol.”

Lockheed conducts final assembly of F-35s at a facility in Fort Worth.

The US Marine Corps and US Navy directed about the incident to Lockheed Martin.

Video circulating on social media shows the jet approaching a runway in vertical landing mode with landing gear down. The aircraft makes contact with the tarmac, but bounces off the ground – sometimes called “porpoising” or a “kangaroo landing” in pilot parlance.

The nose of the F-35 then pitches forward, impacting the runway. The jet briefly disappears in a cloud of smoke, before rotating 180° and dragging the starboard wing across the tarmac.

The pilot ejected when the aircraft settles onto a level plane with both rear landing gear on the runway. Former NASA astronaut and US Navy fighter pilot Scott Kelly described the event on Twitter, saying “Skillful timing on the ejection, right when the wings were level.”

The ejected aviator’s condition was not immediately disclosed. An investigation is underway.

The US Marine Corps (USMC) is the only branch of the US military that operates the STOVL variant of the multi-service fighter aircraft.

The Fort Worth crash caps a year that saw several serious incidents involving F-35s. In October, a US Air Force F-35A crashed in Utah, and in January a US Navy (USN) F-35C was lost in the South China Sea while attempting to land on the USS Carl Vinson  aircraft carrier.

Pilots in both incidents ejected safely. The F-35C was later recovered by the USN.

In November 2021, a UK Royal Navy F-35B assigned to the HMS Queen Elizabeth crashed in the Mediterranean Sea.