At a presentation in the company's chalet, vice-president of airborne surveillance systems Lars Tossman declined to specify exactly how many times the aircraft has flown since its maiden flight in March, but that it is in the air "more or less every day".

The aerial work so far has focused on expanding the aircraft's flight envelope, and Tossman says there have been no surprises.

The Swedish company is building three examples to fulfil an order placed by the United Arab Emirates at the 2015 Dubai air show.

Tossman declined to say when the first UAE aircraft would be delivered, but says that generally it takes 36 months from contract signing to delivery of an AEW&C platform. The UAE is kept informed about the aircraft's development, and signs off on milestones as they occur, says Tossman.

"They gradually accept it bit by bit," he says. "They follow every step of the process." 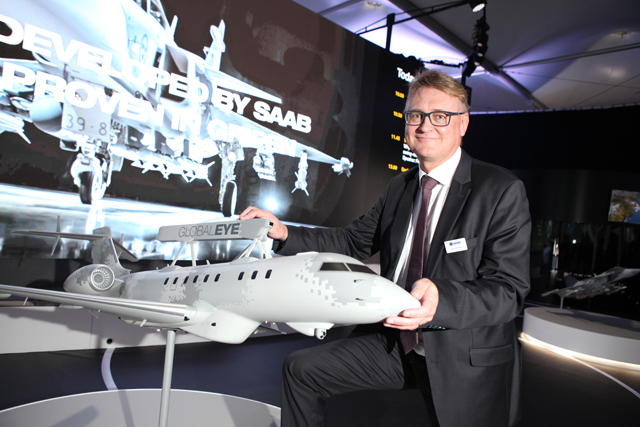 On the broader market, he says there is firm demand for surveillance capabilities around the world. While platforms such as GlobalEye are developed to operate in warfare conditions, they have immense utility in peacetime. The aircraft's ability to monitor contacts in the air, sea, and on land can be used for a range of missions.

As for the technical aspects of the integration, Tossman believes that the Bombardier 6000, on which the GlobalEye is based, produces ample power for the early warning and control radar in a "skibox" fairing above the fuselage, the search radar and electro-optical/infrared sensor beneath the fuselage, the electronic warfare system, and the crew stations. Endurance for the aircraft is 11h.

The early warning radar relies on gallium nitrate technology, and this helps with the efficient use of power, he adds. Still, the sensitivity of the radar creates problems.

"Better radar increases complexity," he says. "We can see birds, but we don't want to see birds, so we have to create a software solution for this."

Several reporters asked Tossman whether Saab would participate should the UK government decide to open a competition for AEW&C aircraft, and not move forward with a controversial plan to replace the Boeing E-3D Sentry with the 737-based Wedgetail.

"We offer the most modern airborne early warning system today. We would certainly welcome an open, transparent competition - but it's up to the government what they want to do."