Korea Aerospace Industries (KAI) has issued an image of the first KF-X fuselage, which is undergoing assembly in the company’s Sacheon factory.

The company states that the first prototype of the twin-engined jet will be rolled out by April 2021, with test flights starting in 2022. 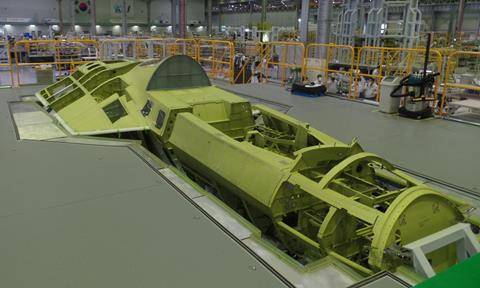 Test flights will run out to 2026, with mass production to start by 2028. This first batch of jets, says KAI, will have limited weapons capability, but series production aircraft built from 2029 will be able to use a full range of air-to-air and air-to-ground munitions.

KAI adds that of the six prototypes that will be produced, one will go to Indonesia. Jakarta is a 20% partner in the $7.2 billion programme, though it continues to squabble with Seoul over costs.

The emergence of the KF-X fuselage came one month after GE Aviation confirmed that it had shipped the first F414 engine for the type. The US company will deliver 15 F414 flight test engines by 2021.

In March, Hanwha Aerospace chief executive Hyunwoo Shin told FlightGlobal that the firm was in discussions with GE about local production of the F414. Hanwha already produces the F404 engine for KAI’s T-50 family of advanced jet trainers and light-attack jets. 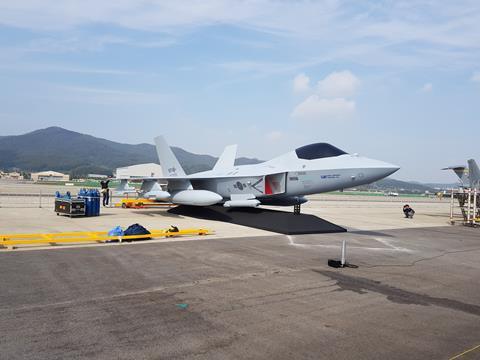 Hanwha Aerospace’s 49%-owned unit, Hanwha Systems, has developed an indigenous active electronically scanned array radar for KF-X that passed the critical design stage in 2019. The company hopes to deliver units of the new radar in 2021.

The centerpiece of the Seoul ADEX defence show in October 2019 was a full-scale mock-up of the KF-X.