GE Aviation has completed testing of the experimental adaptive engine the company has been developing for the US Air Force (USAF) since 2016.

Under the service’s Adaptive Engine Transition Program (AETP), $1 billion was given to both GE and Pratt & Whitney to develop a so-called adaptive engine. The goal was to develop a powerplant that could combine the high performance of a conventional fighter, with the cruising fuel efficiency of a commercial jet. 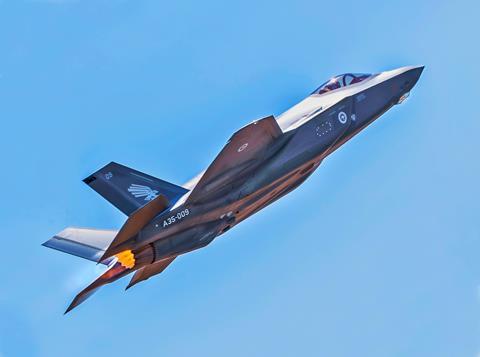 GE said on 12 September that the conclusion of testing marks the final milestone of the company’s AETP contract with the USAF, the result of which is the XA100 engine.

“This is the culmination of more than a decade of methodical risk reduction and testing GE has completed with the air force across three different adaptive cycle engine programmes,” says David Tweedie, vice-president of GE Edison Works and general manager for advanced products.

Testing was conducted at the USAF’s Arnold Engineering Development Complex in Tennessee.

Tweedie describes the XA100 as having “transformational capability, while also demonstrating a return on substantial USAF and taxpayer investment”. He told FlightGlobal in July that his company could have an XA100 flying on an F-35 by the end of this decade.

GE says the engine would produce a 10% increase in thrust, improve fuel efficiency by 25% and provide “significantly more” heat dissipation capacity on the Lockheed Martin F-35, for which it was designed.

“We now stand ready to transition to an engineering and manufacturing development programme and bring this engine to the field,” he adds.

However, the XA100 may never see operational use.

The AETP activity was launched with the goal of producing a new, more capable engine for the stealthy F-35. The advanced, fifth-generation strike fighter is currently powered by a single P&W F135 engine. Continuous advancements in the F-35’s array of onboard sensors has resulted in the jet’s engine being operated beyond its specified power and cooling parameters.

However, P&W has since put forward a more modest modernisation package of the existing F135 powerplant, which it calls the Enhanced Engine Package (EEP).

While the engine maker is also developing its own XA101 adaptive engine for AETP, the company argues that EEP represents a more cost-effective solution to the current F135 shortcomings that can be rolled out to the entire USAF F-35A fleet much faster than an entirely new engine.

Concerns about the cost of a fleet-wide engine replacement have left the future of the AETP engines in doubt, leading P&W to push for the EEP alternative.

Additionally, the USAF recently announced nearly $5 billion in grants to support the development of its Next Generation Adaptive Propulsion (NGAP) programme, which would power the service’s Next Generation Air Dominance (NGAD) sixth-generation aircraft.

NGAP contracts each worth $975 million were awarded to both GE and P&W, as well as Boeing, Lockheed and Northrop Grumman.

The rationale behind the decision is apparently two-fold: to not let technological advancements from AETP go to waste; and financially support the USA’s propulsion industrial base.

Speaking in August, USAF official John Sneden warned that the USA risked falling behind in the development of advanced jet propulsion if sufficient investment was not made in the field.

“The reality is we’re essentially stagnating, and we’re starting to lose,” he says.

A USAF statement to FlightGlobal appears to confirm that thinking, as it relates to NGAP.

“The NGAP programme builds upon the technologies matured under the AETP to deliver propulsion options for the NGAD family of systems and to digitally transform the US propulsion industrial base,” the service says.