Beijing’s years of patient investment in the Xian H-6 bomber, a local variant of the Cold War-era Tupolev Tu-16, have created an attack asset which is of significant concern to Washington DC.

If aircraft mentions are anything to go by, the Pentagon’s recent China Military Power Report suggests the flexible, powerful H-6 is the jet that most worries US defence planners. 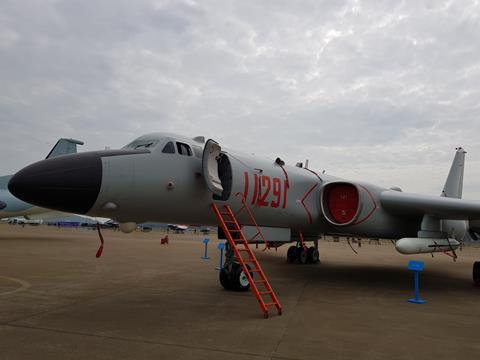 The H-6K at 2018’s Airshow China in Zhuhai. The K-, J-, and N-models feature upgraded engines and other major improvements

The H-6 family receives 33 mentions in the 173-page report. China’s much-hyped new stealth fighter, the Chengdu J-20, is far back in second place with just 11 mentions. What is arguably Beijing’s most capable fighter, the Sukhoi Su-35, garners just two references. The report dedicates only a few brief lines to China’s planned stealth bomber, saying no more than it will be ready sometime in the mid-2020s.

American concerns about the H-6 are warranted. Though ultimately based on the obsolete Soviet Tu-16 that was retired from Russian service in the early 1990s, the H-6 will be the mainstay of China’s bomber force well into the 2030s. Even with the arrival of a new stealth bomber, tentatively designated the H-20, the venerable H-6 will remain a core platform.

The H-6 has gone through a complex series of iterations and upgrades since entering Chinese service in the 1960s. New variants such as the H-6K and H-6N operated by the People’s Liberation Army Air Force (PLAAF), and the H-6J operated by the People’s Liberation Army Navy Air Force (PLANAF), are vastly more capable aircraft than the old Tu-16. They also mark a major improvement over the previous generation of H-6 platforms such as the G, H and M. Another updated variant, the HD-6, is understood to be a dedicated electronic warfare aircraft.

In addition to heavy payloads of standoff-range weapons, the K, J, and N variants are powered by two Soloviev D-30 turbofans, which are far more efficient than the WP-8 turbojets that powered previous H-6s. There is also speculation that the type has been fitted with the locally-developed WS-18 turbofan, the engine that will eventually power the Xian Y-20 strategic transport.

With much larger engine inlets to accommodate the upgraded powerplant, the K, J and N variants dispense with the original glass nose of the Tu-16 and H-6, replacing it with a solid nose housing for a passive electronically scanned array or, potentially, an active electronically scanned array radar. It also has an electro-optical/infrared turret under the fuselage. The tail gunner’s station found on previous iterations makes way for a fully enclosed tail. 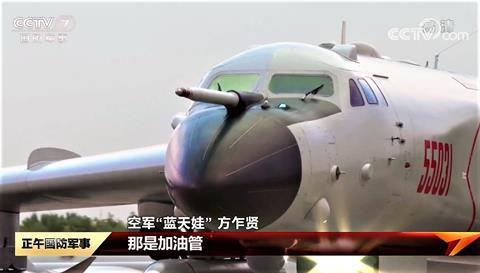 The latest variant, the H-6N, was revealed during Beijing’s massive military parade on 1 October 2019.

“In October 2019, China signalled the return of the airborne leg of its nuclear triad after the PLAAF publicly revealed the H-6N as its first nuclear-capable air-to-air refuellable bomber,” says the US Department of Defense report.

A nuclear triad is viewed as a cornerstone of nuclear deterrence. Comprising land-based intercontinental ballistic missiles, submarine-launched ballistic missiles, and long-range nuclear-capable bombers, the triad is seen as guarantor of a viable second strike capability.

In addition to the refuelling probe, the H-6N has a special concavity underneath its fuselage. The Pentagon says this can be used to carry an anti-ship ballistic missile (ASBM) or an unmanned air vehicle.

“The H-6N can carry China’s new Air Launched Ballistic Missile (ALBM) derived from the DF-21D ASBM, which means it could launch such weapons from inside China’s anti-access, area-denial (A2/AD) envelope against US carrier battlegroups 809nm (1,500km) away, and well beyond the range of carrier-based air cover such as the [Lockheed Martin] F-35C,” says Malcolm Davis, senior analyst, defence strategy and capability at the Australian Strategic Policy Institute.

Another weapon he sees the H-6 carrying is the CM-401 short-range ALBM. This weapon’s “skip-glide” trajectory makes it particularly challenging for ballistic missile defence systems to intercept. 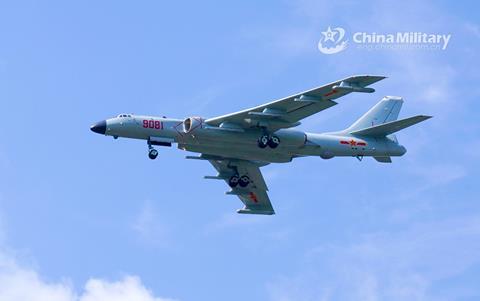 PLANAF H-6J bombers have three hardpoints for missiles on each wing, as well as a pair of electronic warfare pods on a fourth station

While the H-6N is still new, with only limited numbers in service – Beijing is extremely secretive about aircraft numbers – H-6Ks and H-6Js are poised to provide the backbone of Chinese striking power in the Pacific, supporting Beijing’s still powerful force of legacy H-6 platforms, such as the G, H and M.

The Pentagon notes that the PLAAF’s H-6K, with three hardpoints under each wing, is capable of attacking the key US Pacific base in Guam. The PLANAF version of the H-6K, the H-6J, also features three hardpoints under each wing, giving it a payload of six YJ-12 supersonic anti-ship cruise missiles. This allows it to strike ships out to the “Second Island Chain”, which extends from Japan through Guam to the South Pacific, in support of the older H-6G, which itself can carry four YJ-12s.

Strategic locations such as Taiwan, which Beijing claims as a breakaway province, plus Okinawa in Japan, South Korea, and the countries of Southeast Asia are all within easy range of the H-6 force. H-6Ks have also practiced landings at military bases that China has developed from atolls in the South China Sea.

An interactive map posted by the Asia Maritime Transparency Initiative indicates that H-6 bombers operating from South China Sea atolls enjoy a combat radius that embraces all of Southeast Asia, including the world’s most important maritime chokepoint, the Straits of Malacca.

In the event of a war, were the Chinese Communist Party to make the momentous decision to attack US and allied bases in the region, H-6-mounted cruise missile attacks would be tightly coordinated with strikes from short- and intermediate-range ballistic missiles, of which Beijing possesses large numbers. The simultaneous arrival of waves of air-launched cruise and ballistic missiles would be calibrated to overwhelm air base defences. The Pentagon report also warns about H-6Js spearheading saturation attacks against US aircraft carriers. 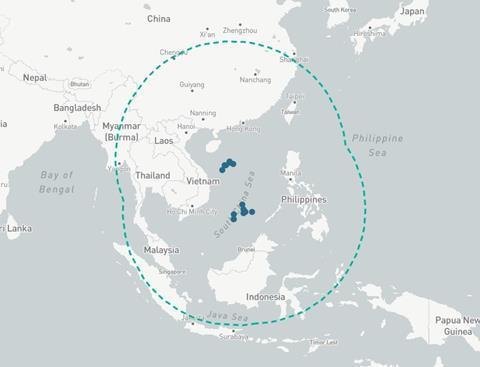 Andreas Rupprecht is the author of Modern Chinese Warplanes, an authoritative guide to mainland airpower. He estimates that China probably fields just under 100 H-6Ks, comprising about one half of China’s overall bomber force – the balance mainly comprises older H-6Hs and H-6Ms. He believes that production of the H-6K may have stopped, with the PLAAF’s H-6N and PLANAF’s H-6J now being produced in parallel.

But while the evolution of the H-6 highlights China’s ability to innovate and add capability to a legacy platform, the platform has clear weaknesses. Unlike US Air Force bombers such as the Boeing B-1B and B-52, and Northrop Grumman B-2, only the H-6N variant is capable of being refuelled in the air.

From a Chinese perspective, however, this may be a manageable challenge given that in a West Pacific conflict H-6s will operate much closer to home, with plenty of basing options. Having bases close to contested areas will allow Chinese bombers to generate far more sorties than their US counterparts. Should American bases in the Asia-Pacific be unusable, American bombers will have no option but to make long transits across the Pacific.

Moreover, the lack of refuelling capability with most of the H-6 fleet is somewhat of a moot point. Beijing has just a handful of capable tankers in the form of the Ilyushin Il-78. A tanker version of the Y-20 strategic transport is being developed to beef up this crucial capability. For the time being, however, a lack of tanker assets is a major challenge for Beijing. 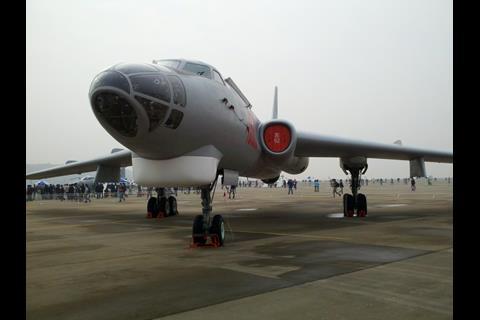 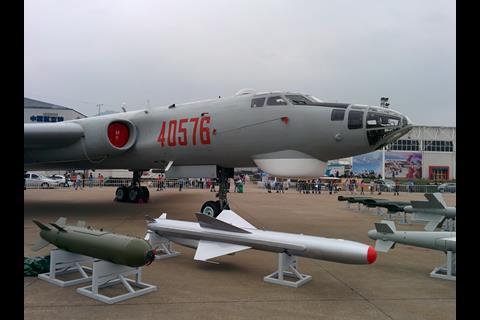 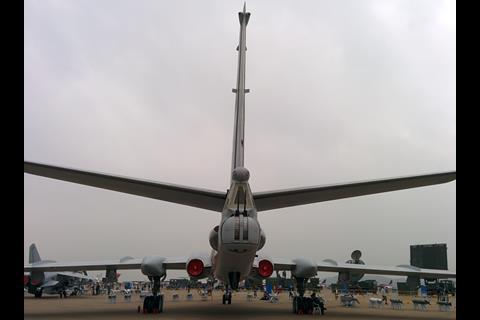 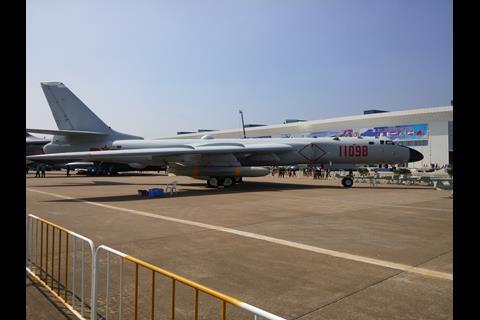 The PLAAF's H-6K made its first appearance at Airshow China in November 2016. 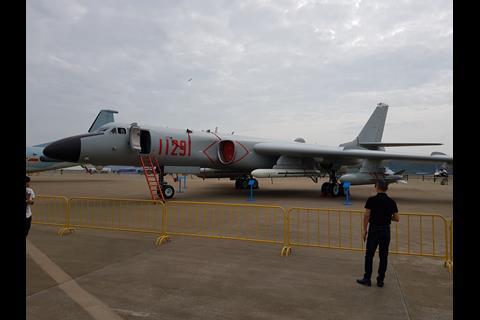 Davis adds that the H-6 will be effective in the standoff role, but only if it operates in uncontested airspace well clear of opposing fighters and air defences. “Don’t expect H-6 bombers to be operating beyond the range of PLAAF land-based air cover, or PLANAF fighters off carriers.”

While the H-6 is an ideal platform for supporting Beijing’s comprehensive A2/AD strategy to keep US forces at bay in the event of a conflict, only the arrival of the H-20 will give the PLAAF a strategic capability similar that offered Washington by the B-2 or developmental Northrop B-21.

“Where the H-6 platform is primarily designed to support the A2/AD mission of the PLA, the H-20 platform will be focused on strategic nuclear deterrence roles and represents China’s move to a real nuclear triad that increasingly mirrors the US and Russian nuclear force structures,” says Davis.

Such a bomber would constitute a threat not only to Beijing’s regional rivals, but place the continental USA at risk.

If aviation history has shown anything, however, it is the ability of supposedly obsolete bomber designs to adapt and find new missions, even when more advanced types are fielded. The B-52 will remain in service longer than the two aircraft that were once pegged to replace it: the B-1 and B-2. History is also littered with advanced, highly capable platforms, such as the B-2, that for cost reasons are never acquired in sufficient numbers to replace older stalwarts. China’s dynamic H-6 will continue to influence US defence thinking for years to come.