The milestone was marked with the air force’s 18 Sqn – named the ‘Flying Bullets’ – at Sulur air base in Tamil Nadu state in southern India on 27 May, says the fighter’s manufacturer, Hindustan Aeronautics (HAL). 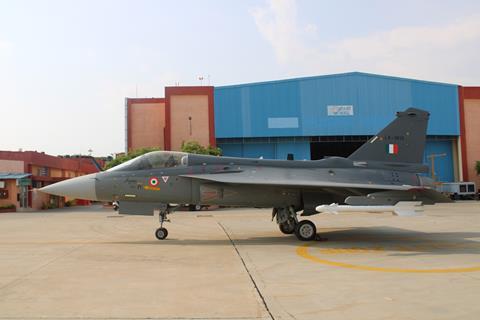 HAL – which conducted a first flight with an FOC-version Tejas from its Bengaluru facilities in March – says a further four examples “are in the advanced stages of production and testing, and are expected to join the squadron soon”.

The company adds that it has already provided training for a first batch of 18 Sqn pilots and maintenance personnel.

Cirium fleets data shows that the Indian air force had 16 Tejas fighters in use prior to the latest delivery. The service has to date ordered 20 examples each in the IOC and FOC standards, while New Delhi also plans to acquire 83 in an improved Mk-1A configuration for around $5.3 billion.