Seoul has completed the critical design review (CDR) of the Korea Aerospace Industries (KAI) KF-X fighter, setting the stage for the rollout of a prototype in the first half of 2021.

The twin-engined fighter will operate its maiden sortie a year later in the first half of 2022, according to a Defense Acquisition Program Administration (DAPA) statement. Development will be completed by 2026.

In addition, a full-sized mock-up will be displayed at next month’s Seoul International Aerospace and Defense Exhibition.

The statement follows a CDR meeting that ran from 24-26 September held by the Defense Affairs Agency. The CDR confirms that the proposed jet will meet “all requirements reflected in the initial product specification.” 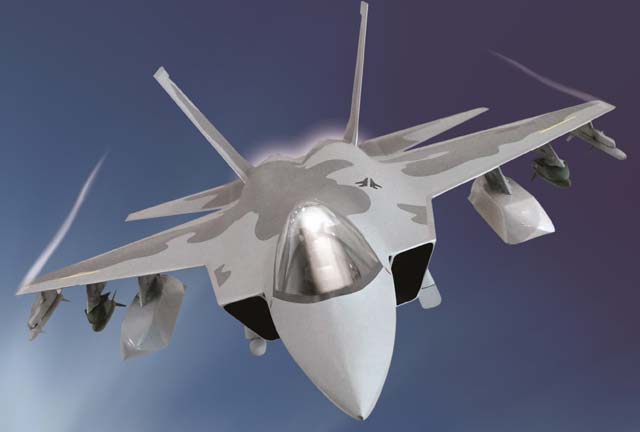 A full-sized K-FX mockup will be revealed at October’s ADEX show.

Work leading up to the CDR included wind tunnel tests, the refinement of systems, and analysis.

“In this detailed design review meeting, reviewers composed of government and civilian experts, including the Air Force, reviewed about 390 technical data [points] to ensure that the military requirements were properly reflected in the design,” says DAPA.

The Agency for Defense Development (ADD) and KAI are leading the $7.2 billion KF-X project with Indonesia, the project’s junior partner with a 20% share. As now envisaged, the KF-X will be 4.5-generation fighter aircraft on par with advanced version of the Lockheed Martin F-16.

The statement, however, makes no mention of project partner Indonesia or the I-FX variant.

In July it emerged that Jakarta continues to press for concessions on the price of involvement in the K-FX/I-FX fighter programme. A report by Indonesia’s official Antara news portal quotes government minister Wiranto as suggesting that the next payments be not in cash, but potentially a contra deal involving Indonesia-produced defence equipment.

The achievement of the aircraft CDR follows the CDR of the aircraft’s active electronically scanned array (AESA) radar earlier this year. The prototype of the radar was developed by Hanhwa systems with assistance from Israel’s Elta Systems. ADD will help with airborne tests of the radar.

The KF-X will be powered by two General Electrics-built F414 engines, variants of which power the Boeing F/A-18E/F Super Hornet and the Saab Gripen E.