KC-46 certificated for use in nearly all daily refuelling missions: USAF

The US Air Force’s (USAF’s) troubled aerial tanker received a boost on 1 June, when the service announced the Boeing KC-46A Pegasus is now approved to handle 97% of daily refuelling missions. 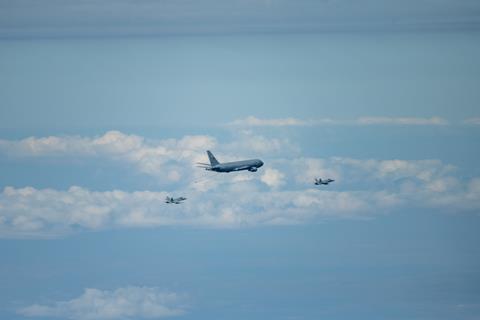 The approval was narrowly granted to missions where those aircraft are tasked to US Transportation Command (USTRANSCOM), which oversees logistics support to the American military, rather than combat operations.

However, Minihan notes that 12 months ago, the KC-46 was not approved to operationally support any USTRANSCOM missions.

“With a team of incredible professionals across the enterprise analysing the data and making risk-informed decisions, we’ve deliberately and aggressively accelerated the Pegasus’ operational use,” Minihan says of the recent change, which took effect on 31 May.

In a statement announcing the new policy, the USAF says that over the preceding year the KC-46A demonstrated growing operational capacity at a swift pace, despite restrictions and deficiencies.

Boeing has struggled to meet cost and production targets throughout the Pegasus programme. The aerospace manufacturer has racked up more than $5 billion in cost overages on KC-46 production, a trend that extends to many of Boeing’s other defence programmes.

Despite those setbacks, the Pegasus has been gradually making progress. In addition to the recent USTRANSCOM certification, the KC-46A notched its first refuelling of an international receiver on 18 April, when a Pegasus successfully delivered fuel to a Spanish Boeing EF-18 Hornet (classified as the C-15 in Spain).

The USAF says that demonstration led to approvals for the refuelling of several other nations’ aircraft, including Australia, Canada, Finland, Italy, Malaysia and Switzerland.