A little over a month after the USA dumped Ankara from the F-35 Joint Strike Fighter programme over its decision to buy the Almaz-Antey S-400 Triumph anti-aircraft missile system, Turkey’s President Recip Erdogan showed up at the MAKS air show looking for a new defence partner.

Russian President Vladimir Putin did his best to court the leader of the NATO member country with a large display of Russian air power, including an aerobatic demonstration by four Sukhoi Su-57 stealth fighters and the air show debut of the Irkut MC-21 commercial airliner.

The two leaders drove around the show together in the back seat of a black Mercedes Benz that flew Turkish flags above its bonnet. After giving speeches at the air show’s opening ceremony, the pair examined various manufacturers’ products on display for several hours, while police and military personnel cordoned off hundreds of air show attendees. Putin even bought Erdorgan an ice cream cone. 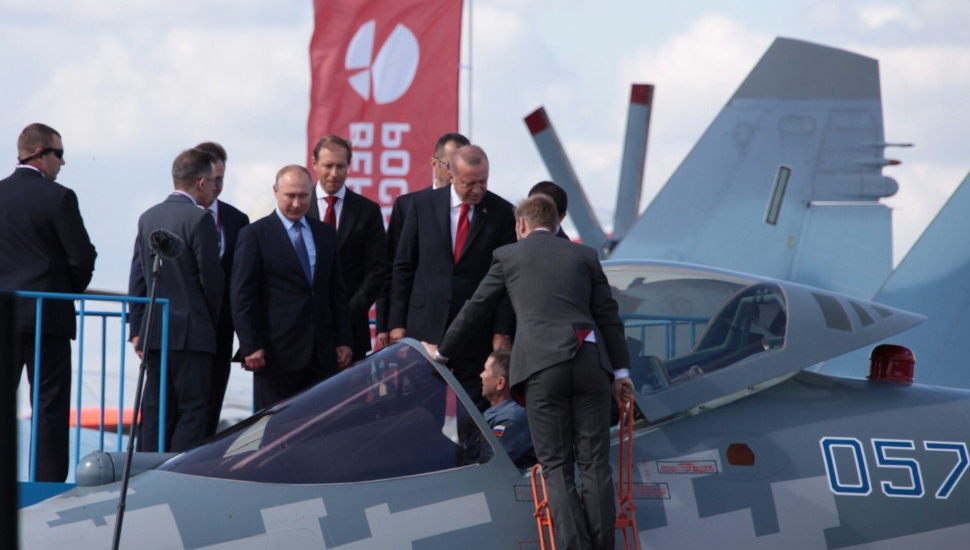 The Turkish delegation to Moscow included military personnel and business executives. Putin offered joint aviation projects to Ankara. "We talked about cooperation on the Su-35 and even on possible work on the new Su-57 plane," Putin told TASS, a Russian state-owned news agency.

United Aircraft Corporation, the parent company of Sukhoi, unveiled the export version of its fifth-generation fighter, the Su-57E, at the show. Erdogan and Putin peered inside the cockpit of one of the combat aircraft on static display.

Even though Erdogan did not commit to joint development projects with Moscow, or the purchase of any Russian aircraft, he says the two countries’ recent agreement to jointly produce part of the S-400 Triumph anti-aircraft system strengthened their defence cooperation. "The joint production [of the S-400] is a major step in relations with Russia,” he told TASS.

Turkey’s purchase and receipt of the S-400, which Russia claims has anti-stealth capabilities, caused the USA to eject the country from the Lockheed Martin F-35 stealth fighter programme in July 2019. The USA and its allies feared that the Russian-made system would expose vulnerabilities in the F-35’s stealth abilities.

Putin is trying to use the USA’s reaction to the S-400 as a means to drive Washington, D.C. away from its weaker allies and partners. Next week Putin will host talks with Indian Prime Minister Narendra Modi, whose country also ordered the S-400.