US Air Force cargo jets delivered much-needed baby formula to the USA from Europe, amidst an ongoing nationwide shortage.

A Boeing C-17 Globemaster III touched down at Indianapolis International airport in Indiana on 22 May with 35,000kg (78,000lb) of infant formula from Switzerland; enough for half a million baby bottles. The formula was trucked from Zurich to Ramstein air base in Germany, according to the Pentagon, where it was loaded onto 132 pallets for the flight to the USA. 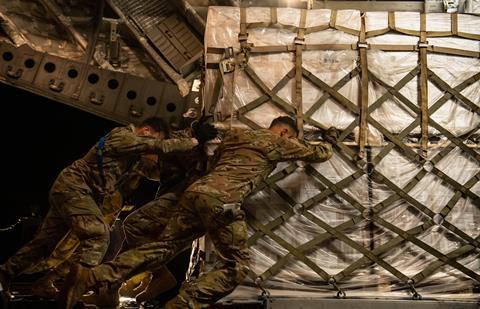 Dubbed Operation Fly Formula, the relief effort is being managed by the Department of Defense’s (DoD’s) Transportation Command (USTRANSCOM).

“Whether the needs are in Ukraine, India, or even right here at home, from deploying combat-credible forces, to providing vaccines, food, water and supplies during a pandemic or natural disaster, USTRANSCOM will deliver,” says Air Force General Jacqueline Van Ovost, commander of USTRANSCOM.

Van Ovost’s command oversees the US military’s massive globe-spanning logistics operations. USTRANSCOM had been considering using contracted, civilian aircraft for the baby formula delivery, according to DoD spokesperson John Kirby, because that option is typically cheaper and more efficient than using military aircraft.

In fact, Kirby says much of the $4 billion worth of military hardware that has been sent by the USA to Ukraine since that country was invaded in February has been moved via so-called “contract air”.

However, speaking at a 20 May press conference ahead of the flight, Kirby also caveats that uniformed military air crews could wind up making deliveries.

“It is possible that through Operation Fly Formula, we would determine that the most efficient way to do it would be on a grey tail, a US military aircraft,” Kirby says.

Ultimately, that turned out to be the case. US Secretary of Defense Lloyd Austin approved US military aircraft for the formula mission in an effort to reduce the shipment time line. 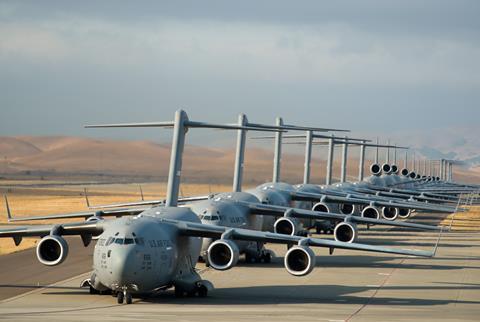 The Pentagon notes that such a delivery typically takes two weeks or more, and even using contract air would have required several additional days for the acquisition of a contracted flight.

In the USA, the military does not typically become involved in normal commercial activity. However, on 18 May, President Joe Biden invoked a 1950 law known as the Defense Production Act (DPA) in response to the formula shortage.

The DPA gives the US government authority to direct actions of private companies during a national crisis. It was passed during the lead-up to the Korean War, when the USA did not have a permanent military-industrial base. When invoked, the DPA allows the president to identify businesses capable of producing critical or scarce material and compel them to do so under contract.

The emergency powers have been used in recent years in response to civil disasters like hurricanes and the Covid-19 pandemic, as well as to give the military priority over other customers in procurement contracts.

The Biden administration says it is using the DPA now as a stopgap measure until additional domestic production is brought online.

“Bypassing regular air freighting routes will speed up the importation and distribution of formula and serve as an immediate support as manufacturers continue to ramp up production,” the White House says in its announcement of the decision.

A second shipment of 114 pallets is expected to land at Washington’s Dulles International airport. Formula from both flights will be distributed directly to hospitals, pharmacies and doctor’s offices.