The Indian Air Force has added a powerful anti-shipping capability with the induction of the first Su-30MKI squadron to be equipped with the Mach 2.8 BrahMos cruise missile.

To mark the addition of the capability, New Delhi has resurrected the 222 Sqn ‘Tigersharks’ squadron designation. 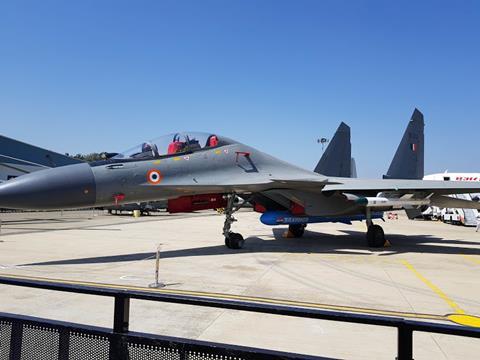 The Su-30MKI can carry a single BrahMos missile on its centreline.

“The squadron will be tasked with the air dominance and maritime role and be equipped with the air launched version of the BrahMos missile,” says the air force.

The ministry of defence said the new squadron will operate closely with the army and navy, and is an example of the “jointness which is the future of the Indian Armed Forces.”

The squadron will be based at AFS (Air Force Station) Thanjavur near the country’s south-eastern seaboard.

The Su-30MKI can carry a single scramjet-powered BrahMos missile on its centreline station. The weapon can attack both land and sea targets at ranges up to 300km, and has variants that can be launched from land and warships.

Three BrahMos test launches have been conducted from the Su-30MKI. The first, in 2017, hit a sea target, while two tests in 2019 saw a land and sea target hit.

India’s programme of record calls for 40 of its S-30MKI fleet to receive the capability to launch the 2.5t and 8.5m-long (28ft) missile.

Separately, India’s defence ministry says that India’s new aircraft carrier, IAC-P71, “is in a very advanced stage of construction and is scheduled to commence Basin Trials in early 2020 followed by the Sea Trials by mid-2020.”

The vessel’s four gas turbines have all been started, and advanced work continues on other major systems.

The ship, previously referred to as IAC-1 (Indigenous Carrier 1) will be India’s first locally built aircraft carrier. As with India’s only the operational carrier, the INS Vikramaditya, it will use a ski-ramp to launch aircraft.

A follow-on vessel (IAC-2) could feature and electromagnetic aircraft launch and recovery system (EMALS). This would allow it to operate a broader variety of aircraft and also allow greater payloads.