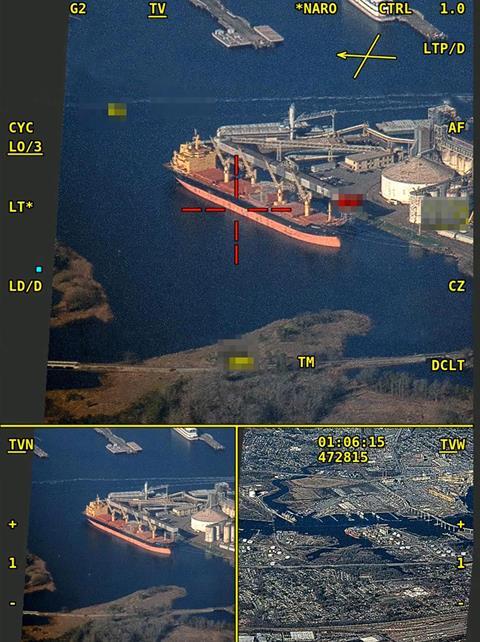 The Litening targeting pod offers full-colour and infrared video, with up to three simultaneous views

The USN pilots also engaged the eye-safe training laser mode that allows the Litening pod to be used for realistic training with combat controllers on the ground. The pilots were able to carry out these operations without advance training, showing what Northrop calls “the ease of use” of the all-weather, electro-optical targeting system.

“The pod’s digital video, autonomous target tracking, and laser sensors will give naval aviators an entirely new set of capabilities for operations over land and sea today, and the growth capabilities built into Litening’s modular design ensure that the pod can evolve to meet changing requirements,” Conroy notes.

The USN in early 2022 selected the Litening to replace the legacy targeting pod system currently operating with the service’s F/A-18 fleet.

The Litening pod is already in service with the US Air Force and US Marine Corps, including on the Boeing AV-8B Harrier, Lockheed Martin F-16, Boeing F-15, Boeing B-52 Stratofortress bomber, Lockheed C-130 Hercules transport and the General Atomics Aeronautical Systems MQ-9 Reaper unmanned air vehicle.

Northrop says it has already delivered more than 900 Litening pods for those airframes, giving the system a combined 3 million flight hours, 1 million of which have been in combat.