A first example of the Ilyushin Il-112V light transport has emerged from the VASO manufacturing plant in Voronezh, as the United Aircraft (UAC) product advances towards its debut flight.

UAC says the twin-engined aircraft was moved from a final assembly position at the site on 27 November, as pre-flight preparations are made. 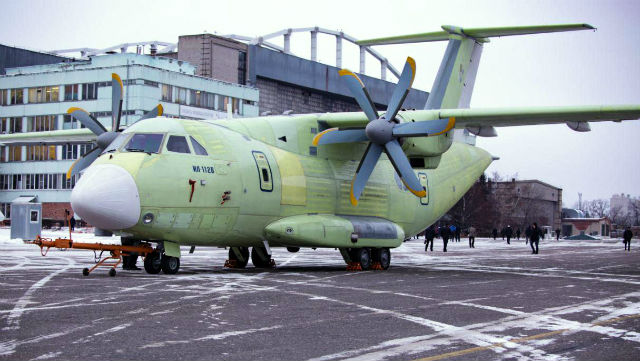 "At the flight-test station, VASO and Ilyushin specialists will conduct a range of tests," UAC says. "Depending on the results, conclusions will be drawn over the readiness of the Il-112V for its first flight."

Intended as a replacement for aged Antonov An-26 transports, the Il-112V is powered by two Klimov TB7-117CT turboprop engines. The design has a maximum take-off weight of 21t, including a payload of up to 5t, while its range with a 3.5t payload is projected at 1,300nm (2,400km).

As well as being able to carry cargo, UAC says the new type will accommodate up to 50 passengers, or 26 armed paratroops.

Flight Fleets Analyzer records the Russian air force as having a current active fleet of 115 An-26s. It shows the service as having options on 35 Il-112Vs, plus letters of intent for up to 27 more.