The US Air Force has selected a joint bid from Raytheon Missiles & Defense and Northrop Grumman to build a new hypersonic weapon.

The Department of Defense (DoD) said on 22 September that the pair won a $958 million contract to produce the Hypersonic Attack Cruise Missile (HACM) for the Armament Directorate of the Air Force Life Cycle Management Center at Eglin AFB in Florida. 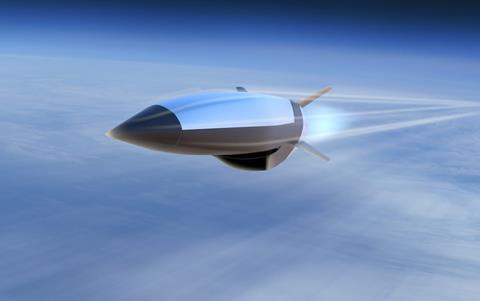 Raytheon and Northrop confirmed the award on 23 September.

“Raytheon Missiles & Defense continues to be at the forefront of hypersonic weapon and air-breathing technology development,” says Wes Kremer, president of the Raytheon business.

The company describes the HACM as an air-breathing, scramjet-powered munition. Scramjet engines use high flight speeds to forcibly compress incoming air before combustion, a process Raytheon says enables sustained flight at hypersonic speeds – generally considered to be Mach 5 or greater.

“Our scramjet propulsion technology is ushering in a new era for faster, more-survivable and highly capable weapons,” Northrop says.

The companies have collaborated since 2019 to integrate Northrop’s scramjet engines into Raytheon’s air-breathing hypersonic weapon designs.

HACM is being developed in conjunction with the Southern Cross Integrated Flight Research Experiment, a joint US-Australia project.

The DoD is running several parallel hypersonic weapon development programmes, including the Air-launched Rapid Response Weapon being produced by Lockheed and the Hypersonic Air-Breathing Weapon Concept, an effort funded by the Defense Advanced Research Projects Agency that uses a Lockheed hypersonic vehicle and a Aerojet Rocketdyne scramjet.

The Pentagon also announced in August $2 million in grants to support hypersonic research at several US universities.

The bid to develop such platforms comes as military leaders in Washington DC increasingly warn that the USA lags in operational hypersonic capabilities – particularly as rivals like China and Russia claim to have produced hypersonic weapons.

The USA’s top military officer, US Army General Mark Milley, in October 2021 described a Chinese test of a hypersonic weapon as “very concerning”, likening it to the Soviet Union’s surprise launch of the Sputnik satellite, which accelerated the Cold War space race.

However, Milley has downplayed those weapons’ impact on the war in Ukraine. During recent congressional testimony, he described hypersonic weapons as having no “significant or game-changing effect” on that conflict.

While the real-world capability of such weapons remains largely uncertain, military strategists caution that the relatively cheap missiles give China a potential advantage over the USA.

Mark Cancian, a former US Marine Corps officer and current researcher at the Center for Strategic and International studies, is running war games to understand how a conflict over Taiwan might play out. He tells FlightGlobal that US air bases in Japan and Guam, and US Navy aircraft carriers, will be extremely high-value targets for China in the opening hours of such a conflict.

Hypersonic weapons pose a potentially substantial threat to these assets, which Cancian says would be essential to any US-led military campaign near the Taiwan Strait.