To come into effect in April 2019, the arrangement has an 11-year term, covering the period until the RAF's expected out-of-service date for the Shadow fleet. Flight Fleets Analyzer shows it has six of the twin-turboprops in current use, with another two to be added to its inventory.

Employed as intelligence, surveillance and reconnaissance assets, the Shadow R1s are assigned to 14 Sqn and home-based at RAF Waddington in Lincolnshire. Five examples were acquired using urgent operational requirement funding more than a decade ago to support UK and coalition ground personnel in Afghanistan, and the UK Ministry of Defence (MoD) pledged to buy three more as part of its Strategic Defence and Security Review of 2015. 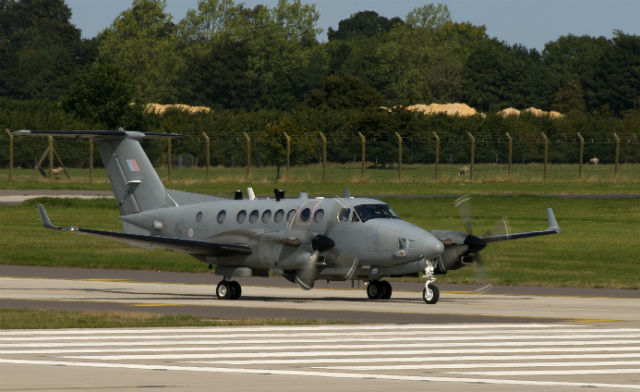 Raytheon UK says its new long-term deal covers "aircraft maintenance, airworthiness management, design organisation and supply chain support". Availability-based services will be provided at RAF Waddington, with other support work and upgrades to be performed at its Broughton site in North Wales.

The new agreement also "serves as an enabling agreement to upgrade the aircraft to the Mk2 version", Raytheon UK says, and the company will be responsible for the design and integration of required modifications. This major capability update will include the use of new sensors and communications equipment, along with increased levels of software automation, the MoD indicated last year.

A preceding upgrade activity is already under way, with initial operational capability due to be declared before the end of 2019. Raytheon UK has previously said that this work is centred on "modularity and connectivity" updates in support of the future Mk2 standard.