It has been a long time coming, but Europe's largest multinational military aircraft programme appears to be finally flying clear of the turbulence that has buffeted its progress over much of the past decade.

First flown in December 2009 in "Grizzly" development aircraft guise, the Airbus Defence & Space A400M is now in service with the air forces of partner nations France, Germany, Spain, Turkey and the UK, plus lone export customer Malaysia. In all, Cirium's Fleets Analyzer shows 81 examples as being in active use, with Belgium yet to take its first "Atlas" from an eight-unit commitment, including one being funded by Luxembourg. 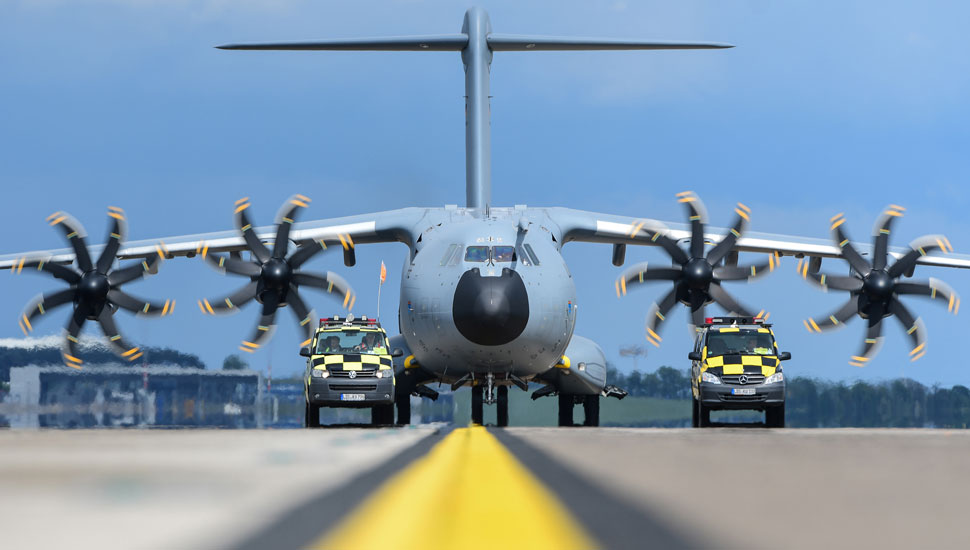 In a major boost for the programme, Airbus on 13 June signed a so-called re-baselining agreement with its seven European launch customers for the tactical transport via the OCCAR defence procurement agency.

"Our main target was to get a stable programme, with a contract that reflects reality," says Alberto Gutierrez, head of military aircraft at Airbus Defence & Space. The new deal encompasses the "steady and controlled" introduction of new capabilities, retrofit work on those aircraft already delivered, and will spread the remaining deliveries out until 2030.

Discussions around a revised contract had been ongoing since March 2017, and according to Gutierrez, solid performance against the programme last year was key to concluding the fresh arrangement. "In 2018, we delivered for the first time all that we planned – it was a proof of credibility to the customer for them to sign the global re-baselining," he says. "And 2019 is going on exactly the same path."

Despite indications last year that Indonesia could be set to acquire the A400M, Airbus is continuing its long wait to secure fresh export success, beyond the four examples already delivered to Malaysia.

"There are still some opportunities – we are working very hard to make it happen," he says.

Speaking at the Paris air show last month, Gutierrez said support from satisfied launch customers will be vital to selling the Atlas internationally. "The ones who are using it are in love with the aircraft… but it is still young," he notes. "The aircraft is not delivering the availability that we are aiming for, but we are getting there."

Meanwhile, further trials are due to take place from later this year on an in-flight refuelling update that should enable the A400M to support the French air force's Airbus Helicopters H225M Caracals. Additional flights to assess the deployment of an increased number of paratroopers are also expected to take place.

Now six months into his tenure as military aircraft boss, Gutierrez spent the first three months of this year visiting operators around the world. "In certain cases it was like music to my ears – particularly when I was talking with our [A330] MRTT customers," he says. "In some other cases there is still room for improvement."

The company's multi-role tanker transport (MRTT) product is now flown by Australia, France, Saudi Arabia, Singapore, the UK and the United Arab Emirates, while the first of eight examples to be assigned to a pooled fleet funded by Belgium, Germany, Luxembourg, the Netherlands and Norway should be delivered in May 2020. 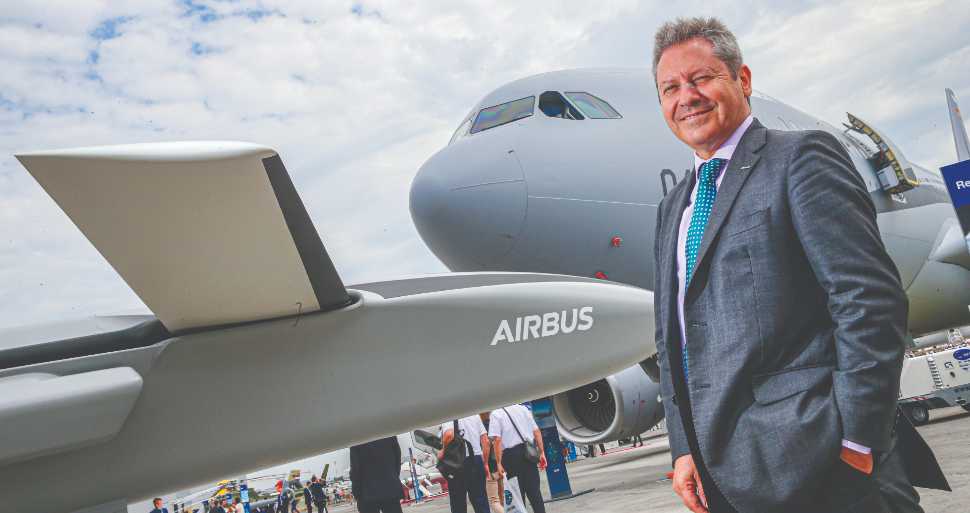 "We have been selling MRTT because we have got a huge technological gap to the competition," he says, referring to Boeing's rival, the KC-46A Pegasus. "We need to maintain this gap, so it is key that we keep investing."

Study areas have included investigating the possibility of performing autonomous refuelling using the A330's boom, and a recent trial effort dubbed Network for the Sky, during which the company's A310 MRTT testbed served as an airborne communications hub, linking with fighters and a combined air operations centre.

Also at Le Bourget, Airbus reaffirmed a tanker partnership with Lockheed Martin, through which the pair will pursue a KC-Y programme opportunity with the US Air Force (USAF). Gutierrez describes the A330 MRTT as "a non-risky solution" for the requirement to replace the service's McDonnell Douglas KC-10s. "We believe Lockheed Martin is the perfect complementary company," he adds.

Noting that the Airbus platform was selected for the USAF twice, before it ultimately acquired the KC-46A, Gutierrez says: "Some may wonder why this time it is going to be different. Since then, we have designed, produced and delivered tankers to the entire world, and our customers talk on our behalf, and are explaining that there is nothing better."

Relishing the prospect of a fresh A330 MRTT pitch to the world's largest tanker operator, he notes: "Everybody likes competition – it helps us to go beyond what we have today."

Gutierrez also wants to replicate the success of the MRTT programme by exploring further configurations – such as airborne early warning and control – and adapting other platforms. One example is the company's proposed M3 derivative of the A320 narrowbody, which could be used to perform roles such as operating as a maritime patrol aircraft.

For another of the European company's products, the C295 medium transport, Gutierrez believes 2019 will be a "crucial year, in terms of deliveries". A first example built for Canada's fixed-wing search and rescue aircraft programme made its flight debut in early July, and deliveries will commence later this year. 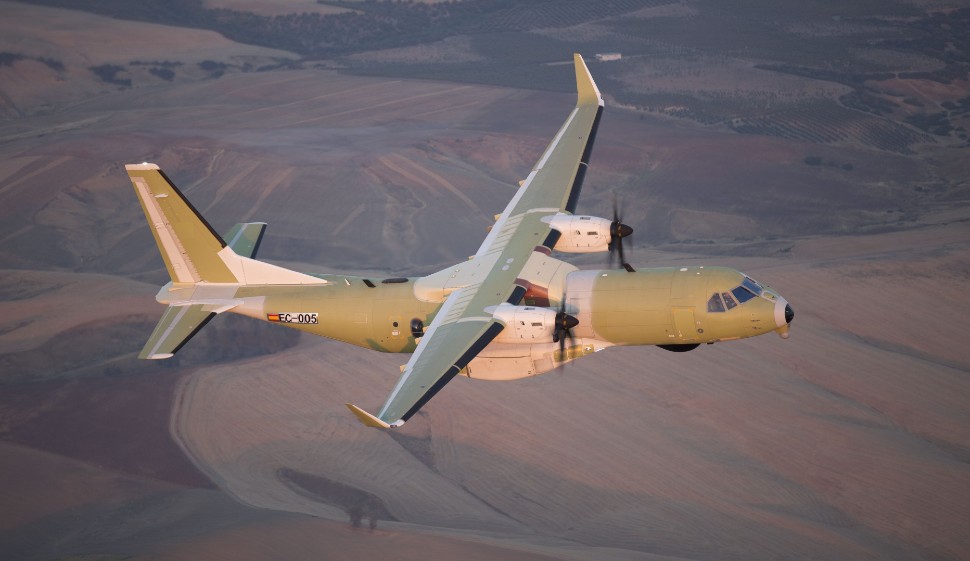 "After a couple of years where sales of the C295 were decreasing significantly, we're now ramping up," he says of the twin-turboprop programme. India remains the biggest opportunity for new sales, with its air force still seeking to replace its aged HS748 "Avro" fleet. "We have been going through the complete process until agreement in terms of conditions and price," Gutierrez says, before quipping: "Now it's only the bureaucratic process."

Other focus areas for the company include creating "smarter products", along with increasing competitiveness, and advancing the digitisation of processes including support, data collection and analysis.

"There are many different tools and systems to help us to become more agile and to reduce by half our lead times and become more efficient," he says. "If you go to one of our facilities now you will see people working with tablets, and using [virtual reality] goggles – this is starting to become a normal way of doing things."

But one of its highest-profile activities for the coming years will be a Future Combat Air System study now being advanced by France and Germany, with Spain also having signed to participate. Programme partners Airbus and Dassault used the Paris air show to unveil a full-scale mock-up of a proposed new-generation fighter, along with an unmanned "remote carrier" vehicle that would operate in concert with the future combat asset.

Although the UK is pursuing its own sixth-generation fighter and supporting technologies via the Tempest programme – and seeking the involvement of partners potentially including Sweden – Gutierrez remains hopeful that industry's development of competing products could yet be avoided and a broader collaboration advanced.

"I would love this to happen; I am a European believer," he says. "We need to go step by step towards this European defence policy that will deliver a common defence industry – it's never too late."