Russia’s military campaign in Ukraine is failing and its forces are inadequately equipped.

That is the assessment of UK defence secretary Ben Wallace, who addressed the ongoing war during remarks at the National Army Museum in London on 9 May. Wallace, the Conservative MP for Wyre and Preston North, is a graduate of the Royal Military Academy at Sandhurst. 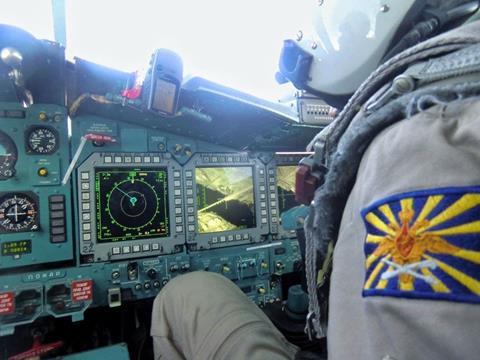 A 2021 Facebook post from Russian politician and air force veteran Viktor Alksnis purporting to show a commercial GPS receiver attached to the cockpit of an Su-34 operating over Syria. UK defence secretary Ben Wallace says similar set ups have been found in the wreckage of Russian jets shot down in Ukraine

As evidence for his characterisation, Wallace cites the wreckage of Russian air force jets that have been found with insecure, non-military navigation equipment.

“GPS receivers have been found taped to the dashboards of downed Russian [Sukhoi] Su-34s”, Wallace says. “So the pilots knew where they were, due to the poor quality of their own systems.”

A July 2021 Facebook post by Viktor Alksnis, who claims to be a 25-year veteran of the Soviet air force, contains a photo purporting to show the cockpit of a Su-34 Fullback fighter bomber operating over Syria with what Alksnis claims is a Garmin commercial GPS unit.

“This photo once again confirms the unfavourable state of our army and makes us wonder if everything there is really as good as Supreme Commander V. Putin and Defense Minister S. Shoigu say about it?” Alksnis wrote in the post.

He claims to have received the photo in a Telegram channel for military informants and says it was dated 2016.

Russia’s air force has significantly underperformed in Ukraine, with western observers citing everything from inadequate pilot training to a shortage of precision munitions as the cause. That is despite a massive numerical advantage in combat aircraft.

Russia has launched more than 2,000 guided missile strikes into Ukraine according to defence officials in the USA, but sorties by manned aircraft are typically limited to brief incursions into Ukrainian air space to launch ordnance, before retreating to Russia.

Wallace concurs with that assessment, saying the Russians’ “limited stockpiles of air-delivered precision weapons, demonstrated by a steep drop off in use after the second week, has meant that the air force has also fallen back on dropping imprecise dumb munitions on urban areas”.

Ukraine’s air force continues to contest the air space over the conflict, recently launching strikes on the Black Sea’s Snake Island with manned and unmanned platforms.

Wallace argues that poor preparation and planning, combined with inadequate equipment and corruption, are to blame for Russia’s failure to take the capital Kyiv and the now-stalled advance in the Donbas region in eastern Ukraine.

“The truth is that Russia’s General Staff are failing and they know it,” he says.