More Lockheed Martin F-35s are ready to fly in Japan.

The US Marine Corps (USMC) says its second squadron of the fifth-generation stealth fighters based in Iwakuni, Japan is now at full operational capability (FOC). The USMC flies the short take-off and vertical landing (STOVL) “B” variant of the F-35 from the Japanese base. 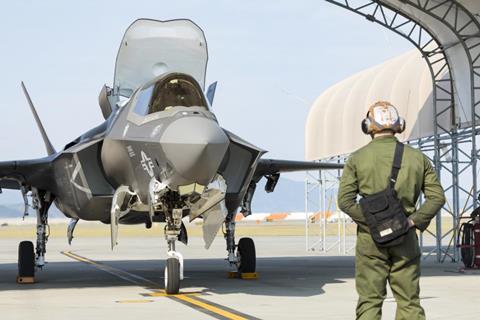 The US Marine Corps’ second squadron of F-35 fighters based in Iwakuni, Japan is now at full operational capability

“The FOC milestone is the culmination of well over two years of planning and execution, all while being forward deployed and in the face of a global pandemic. In my 20-plus years of service, I have never seen a unit come together in a way that our marines and sailors have while overcoming many challenges,” says Lieutenant Colonel Michael Wyrsch, commanding officer of Marine Fighter Attack Squadron 242 (VMFA-242).

The F-35C is designed to operate from the US Navy’s fleet of aircraft carriers.

The Iwakuni air base on Japan’s main island of Honshu was the site of the first forward-based American F-35s, which began arriving in 2017. The installation is now the only location in the Indo-Pacific region to host two permanently based F-35B squadrons, according to the USMC.

The milestone marks the continued integration of defence strategy between the USA and Japan, particularly when it comes to the F-35. In 2021, a USMC pilot with VFMA-242 landed an F-35B aboard the Japanese light aircraft carrier Izumo. It was the first time since the Second World War anyone had landed a fixed-wing aircraft aboard a Japanese carrier.

The Government of Japan also plans to purchase as many as 105 F-35s for its own forces. Sales of 63 conventional take-off and landing F-35A variants and 42 of the STOVL variant are in the works.

Japan’s Air Self-Defense Force also said on 14 May it will develop its own next-generation fighter, the F-3, which will be a collaboration between Tokyo-based Mitsubishi Heavy Industries and the UK’s BAE Systems.

It is unclear how that decision will affect the planned F-35 purchases.