Stratolaunch said on 13 January the objectives of the 6h flight, which took off from the firm’s Mojave, California facility, included leaving the local airspace for the first time and evaluating the “separation environment” for the hypersonic test vehicle, known as Talon-A. 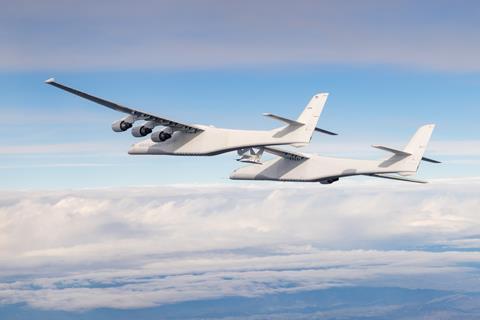 “The thorough evaluation of release conditions will provide data to reduce risks and ensure a clean and safe release of Talon-A during future tests,” says Zachary Krevor, chief executive of Stratolaunch.

Talon-A resembles a smaller version of NASA’s Space Shuttle with stubbier wings and a single, shorter tail stabiliser. It is ultimately meant to be capable of reusable hypersonic flight, according to its designer.

The rocket-powered craft is paired with a dual fuselage, over-wing jet aircraft, known as Roc, which will carry Talon-A aloft for separation and aerial launch. With a 117m (385ft) wingspan, powered by six engines originally developed for the Boeing 747 commercial airframe, Stratolaunch calls Roc the “world’s largest operating aircraft”.

The company says Roc boasts a capacity of 226,800kg (500,000lb). Its current payload, the Talon-A, is carried below the wing and in between the twin fuselages.

The 13 January test marked the second time Roc took off with a Talon-A testbed, designated TA-0. The flight reached an altitude of 22,500ft, which Stratolaunch describes as an “important milestone” on the path to a separation test of TA-0. It was the ninth overall flight for the Roc launch platform, including sorties without Talon-A.

“Roc and TA-0’s onboard data systems provide critical information on the aerodynamic loads and moments prior to release of TA-0, helping to ensure safe separation of the vehicle from Roc,” the company says. “The flight team also practised chase formation and communication sequencing for the upcoming separation test.”

Talon-A’s first hypersonic flight is planned for the first half of 2023, according to Stratolaunch. A second Talon-A testbed, named TA-1, will complete that flight.

“We grow closer than ever to safe separation and our first hypersonic flight tests,” Krevor notes.

Stratolaunch was created by the late Paul Allen, co-founder of software giant Microsoft. The firm has a stated goal of making hypersonic flight-testing more “reliable and routine”.

The Talon-A platform is central to this aim. Stratolaunch says the vehicle will have the ability to ”fly a variety of hypersonic flight profiles while carrying customised payload experiments on board”.

Development and testing of Talon-A is being supported by a research contract from the US Air Force Research Laboratory, which Stratolaunch received in November 2022.