The US Air Force (USAF) has successfully achieved hypersonic flight with an experimental weapon.

On 14 May, a USAF Boeing B-52 Stratofortress flying off California’s coast dropped an AGM-183 Air-Launched Rapid Response Weapon (ARRW), the service said on 16 May.

Following separation from the aircraft, the ARRW’s booster ignited and burned for expected duration, achieving hypersonic speeds five times greater than the speed of sound. 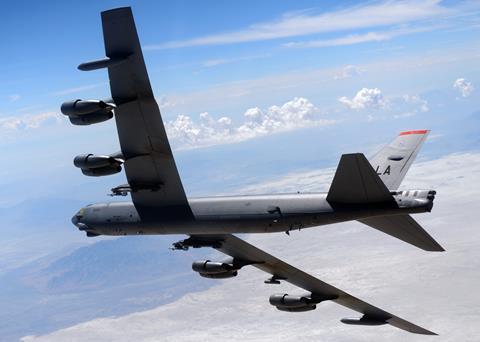 “This was a major accomplishment by the ARRW team, for the weapons enterprise, and our air force,” says Brigadier General Heath Collins, USAF Program Executive Officer for Weapons.

The ARRW was first tested in 2019. At the time, the USAF said it hoped to have a hypersonic weapon at initial operating capability by 2022, but that timeline proved overly optimistic.

The successful launch of an AGM-183 comes as a welcome change for the USAF’s hypersonic weapons programme, which suffered three failed tests in 2021. 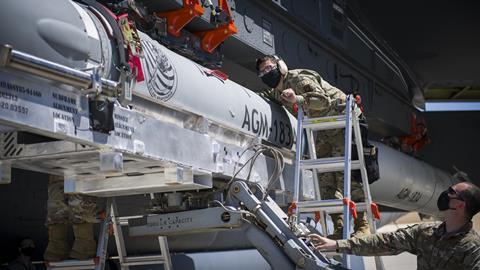 As the ARRW’s developmental challenges piled up, the USAF shifted resources toward an alternative – a hypersonic cruise missile known as the Hypersonic Attack Cruise Missile (HACM).

The USAF’s recent budget request for fiscal year 2023 shows funding for the ARRW cut by more than half compared to the previous year and zeroed out after FY2023.

By contrast, funding for the HACM is projected out to FY2027. Both systems are listed under the umbrella programme of Hypersonics Prototyping.

A third design, known as the Hypersonic Air-breathing Weapon Concept (HAWC), is being developed by the US Defense Advanced Research Projects Agency, commonly known as DARPA. That agency announced a successful test of the scramjet engine-powered hypersonic vehicle in April.

The USA joins a growing list of countries claiming successful tests of hypersonic weapons, including Russia, China and North Korea. Russia is the first nation to claim use of a hypersonic weapon in combat, saying it fired several at targets in Ukraine during its war in that country.

America’s top military officer, US Army General Mark Milley, downplayed the impact of those weapons during recent congressional testimony, saying the hypersonic weapons had no “significant or game changing effect” on the course of the Ukraine war.

By contrast, in October 2021, Milley described a Chinese test of a hypersonic weapon as “very concerning”, likening it to the Soviet Union’s surprise launch of the Sputnik satellite that launched the Cold War-era space race.

We are not responsible for the content of external sites