The Boeing F/A-18F Super Hornet is poised to reach the ten-year mark since its arrival in Australia.

The fighter first arrived in Australia on 26 March 2010, with the Royal Australian Air Force (RAAF) fleet growing to 24 examples, says Boeing. The type became operational in RAAF service in December 2010. 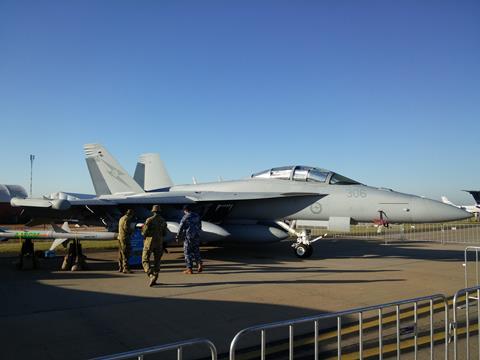 “In the past decade, Boeing has partnered with the RAAF to help develop Australia’s Super Hornet fleet into one of the most advanced and formidable multi-role fighters in the world today,” says Boeing.

“Through a combination of ongoing sustainment and upgrades, Boeing has delivered enhanced capability to the combat-proven, cutting-edge, next-generation Super Hornet, to maintain regional air superiority now and well into the future.”

The RAAF also operates 11 EA-18G electronic warfare jets. It formerly had 12, but one example was lost in a January 2018 accident while attempting to take off from Nellis AFB, Nevada.

The only other operator of either type is the US Navy. Boeing also has a contract to provide 28 Super Hornets – 22 single seat F-18Es and six two-seat F/A-18Fs – to Kuwait by 2022.

Canberra originally agreed to buy the Super Hornet in March 2007 to a fill a “capability gap” created by the retirement of the General Dynamics F-111C in late 2010 and delays to the Lockheed Martin F-35A.

A major question for Canberra will be whether to update its Super Hornets to the new Block III standard being adopted by the US Navy. Block III upgrades would include conformal fuel tanks, a faster mission computer and a more robust communications system.