In two instances, members of a forum for players of combat game War Thunder posted what seem to be classified or restricted documents related to Boeing’s F-15 Eagle and Lockheed Martin’s F-16 Falcon fighter jets. 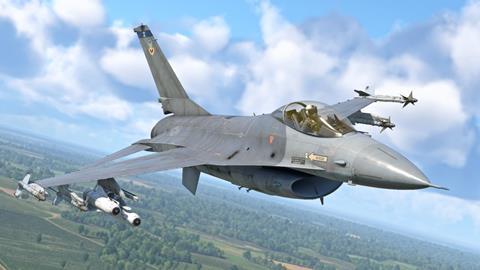 Screenshot of an F-16A fighter, as rendered in the video game War Thunder. The game has recently been at the centre of multiple releases of restricted documents concerning US-made military aircraft

The F-16 post came first, on 15 January, when a user wrote: “Interesting thing I found during my research. During early AMRAAM testing you can see how F-16A would equip the AIM-120”, referring to the Raytheon Advanced Medium Range Air-to-Air Missile.

The post included four attached files, all of which have since been hidden by War Thunder developer and forum host Gaijin Entertainment.

The post came amid a discussion about how accurately the developers of War Thunder modelled the F-16’s flight and cockpit weapons control system, known as the “stores control panel” (SCP).

Budapest-based Gaijin acknowledges to FlightGlobal that “information on AMRAAM missiles for [the] F-16” was posted in the forum by a user in violation of its community guidelines regarding classified or restricted documents.

“As far as we know, these documents are considered export restricted and are not meant to be shared or used by unauthorised people,” Gaijin tells FlightGlobal. “We always delete posts containing classified or restricted information from our forum as soon as possible, and we never use it in our work.”

Although the full documents have been removed from the forum, cover pages of the four reports are still visible. All are marked “Unclassified” but labelled “Export Controlled” and “DoD Only”, referring to the US Department of Defense.

Three appear to be research reports related to development of the AIM-120. The fourth is described as the “F-16 Pilot’s Handbook” for the AMRAAM.

All four are marked “distribution authorised to US government agencies only”, citing various US Air Force (USAF) offices as controlling entities.

Missile maker Raytheon says it is aware of the leak but confirms none of the documents belong to the aerospace conglomerate. It refers questions to the USAF.

A printed warning on both manuals cautions that each “contains technical data whose export is restricted”, with violations “subject to severe criminal penalties”.

The apparent leaks are not the first via the War Thunder forum. In 2021, portions of the UK’s Challenger 2 tank user manual were reportedly leaked. Subsequent posts contained restricted documents related to French and Chinese equipment.

“We remind our users again and again that it’s both illegal and pointless,” Gaijin says of posting classified material. “They should never do that.”