Some 1,781 combat aircraft were in active use with 19 European NATO nations as of 30 September, Cirium fleets data shows. The other nine states – Albania, Estonia, Iceland, Latvia, Lithuania, Luxembourg, Macedonia, Montenegro and Slovenia – all lack such a capability. 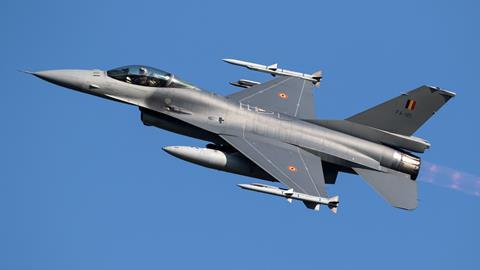 Lockheed Martin’s F-16 is the most numerous and broadly employed combat type, with 512 aircraft – a 29% share – flown by nine of the nations, plus another 180 which are separately categorised as dedicated training assets. The manufacturer’s latest V-model is also on order for future operators Bulgaria and Slovakia.

Germany, Italy, Spain and the UK fly a combined 415 Eurofighter Typhoons, 23% of the regional total, with a 38-aircraft follow-on purchase recently approved by Berlin, and Madrid also eyeing a potential repeat buy. The other 14 types each account for less than a 10% fleet share, ranging from 166 Dassault Mirage 2000-family jets flown by France and Greece to just four Sukhoi Su-25s, used by Bulgaria.

The use of Soviet-era combat assets among European NATO nations continues to dwindle rapidly, now standing at just 111 aircraft: 6% of the active fleet. This total also includes 46 RAC MiG-29s, 32 Su-22s and 29 Mikoyan MiG-21s, in the inventories of Bulgaria, Croatia, Poland, Romania and Slovakia.