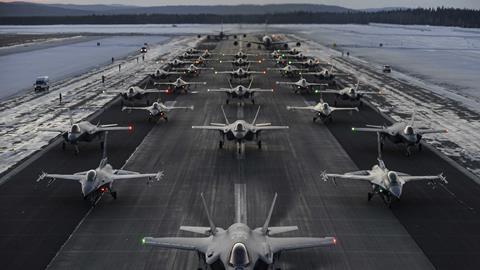 Top US commander calls for adding 12 fighter squadrons to USAF

The US Air Force (USAF) does not have enough multi-role fighter squadrons to adequately support missions it has been assigned.

That is the conclusion of General Mark Kelly, the four-star commander of the USAF’s Air Combat Command, which oversees the service’s conventional combat forces.

“We have departed the era of conventional over-match and entered an era of strategic risk”, he says.

For context, Lockheed Martin plans to produce between 148 and 152 of its fifth-generation F-35 Lightning II strike fighters this year.

In a speech titled “The Force We Present”, Kelly charted the multi-decade decline in air combat power.

In an August report, the Mitchell Institute for Aerospace Studies said the decline in the USAF fleet was the result of two decades of budgets prioritising the US Army during ground wars in Iraq and Afghanistan. This led the USAF to adopt a “divest to invest” strategy, during which the service deactivated older assets to free money for investment in modernisation.

The report was highly critical of that approach, saying: “The nation requires much more from the air force than the resources allocated to it allow.”

In addition to having just half the fighters and one-third the bombers it maintained in 1990, some 80% of the USAF’s fighters exceed their specified design lives. Also, monthly flight hours per fighter pilot decreased over that time to roughly 20 monthly, the report added. 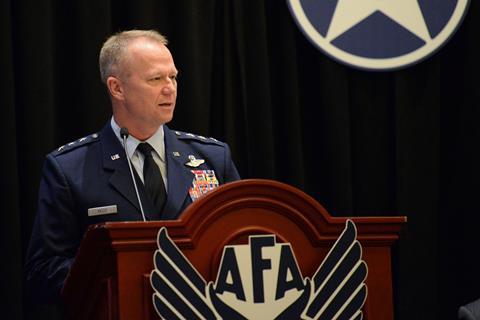 While Kelly says the USAF boasts some of the most-advanced and highly-capable aircraft, he stresses capability is not a substitute for capacity.

Kelly points to the European theatre during the Second World War, noting the capabilities of German aircraft and rockets were unmatched. But the UK and USA had many more aircraft, allowing the Allies to subdue the Luftwaffe and cripple German industry.

In that campaign, air superiority allowed Allied ground forces to advance across the continent and liberate Western Europe. The alternative, Kelly says, would have been a long and bloody slog, akin to fighting now happening in Ukraine.

“If a nation wants an air force that can execute air superiority at a time and place of its choosing… then you need a first-class air force,” Kelly says.

USAF leaders like Kelly, and analysts from groups like the Mitchell Institute, say the USA’s air-power strategy has been veering toward capability and away from capacity.

A war game conducted by the Center for Strategic and International Studies found that the USA and allies in the Western Pacific could lose up to 900 aircraft in a conflict with China over Taiwan.

Kelly says deterrence and security commitments in Europe and the Asia-Pacific region alone require 20 fighter units. Another eight are needed to support operations in the Middle East. North America also has a substantial need for combat air power, with eight squadrons tasked to homeland defence, eight to provide air security to the president and capital region, and eight in reserve.

The final eight squadrons in Kelly’s 60-squadron vision would be removed from operational duty for aircraft modernisation and retrofits.

“When you have conventional over-match, strategic risk is low”, he says.